Write, erase, and write again - on the surfaces of frozen organic salts

UK chemists have discovered how to draw and erase pictures on the surfaces of ionic liquids. The technique, a chemical version of the so-called Etch A Sketch toy, might be used for lithography or electrochemical patterning at the nanometre scale.

Pete Licence, one of the researchers at the University of Nottingham who made the surprising discovery, says his team were ’astounded’ to see that they could create dark patterns in a frozen ionic liquid, simply by using a standard mass spectrometry instrument to pass a focused gallium ion beam over the salt’s surface. ’And we can not only write and read the image, but erase it and rewrite as well,’ said Licence. 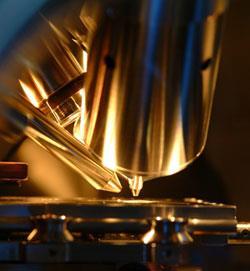 The discovery was made entirely by accident. The researchers were using spectroscopic techniques to investigate the properties of ionic liquids - organic salts whose ions are sterically hindered, so that they stay liquid at room temperatures. As these liquids are made entirely of ions, they have almost zero vapour pressure - allowing them to be studied in the ultra-high vacuum condit ions necessary for secondary ion mass spectrometry (SIMS), where a gallium ion beam fires electrons out of the liquid’s surface.

When the ionic liquid was frozen, imaging software plotting charge distribution showed dark areas of contrast, following the gallium beam’s path. Licence suggests that when electrons are fired out, a positive charge is left behind, which seems to stay localised in the frozen surface. But this pattern was easily erased: melting the salt (by raising the temperature) wiped the slate clean. Alternatively, flooding the surface with low-energy electrons also dissipated the positive charge. Another image could be written when the ionic liquid was frozen again.

Since the team were using a standard SIMS instrument, their gallium ion beam only created micrometre-sized lines. But Licence points out that state-of-the-art instruments can generate beams less than ten nanometres wide. Aside from the new technique’s potential for data storage, Licence suggests that it might be used for micro-lithography, where a masking image could be rendered onto a surface coated with an ionic liquid. A positively-charged dark pattern could also be used to template the self-assembly of other charged molecules.

Licence isn’t sure that the technique would work with any other kind of frozen liquid. A low-melting point polymer, for example, might just be physically scarred by the gallium beam, so that any pattern couldn’t be rewritten. The peculiar charge-stabilising properties of ionic liquids allow an image to be stored, but also wiped away without permanent damage. The Nottingham team have patented their discovery, and are working on stabilising the image in non-vacuum conditions, where charged particles in the atmosphere may lead to it fading.