Chemists in Japan and France have produced a new iron oxide with a sheet-like structure that could be used in fuel cells and sensors. The team produced the compound by gentle reduction in a way that may also yield other unusual and potentially useful crystalline structures.

Hiroshi Kageyama from the University of Kyoto and colleagues started with a conventional strontium iron oxide with formula SrFeO3-x. In these crystals the iron atoms are surrounded by six oxygens in an octahedral formation. 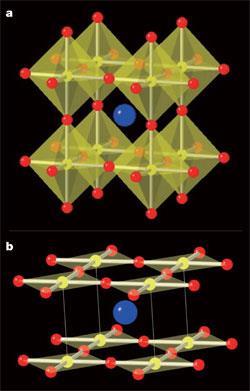 a) The cubic perovskite SrFeO3. b) The infinite-layer compound SrFeO2. Iron, strontium and oxygen atoms are represented as yellow, blue and red spheres, respectively

The textbook approach to reducing such a compound is to use hydrogen at high temperature. But this reaction is very difficult to control and invariably results in all the oxygen being pulled out of the system.

Instead, the researchers used calcium hydride at a temperature of only 280?C to ease oxygen atoms out of the lattice. After first passing through an intermediate state, SrFeO3-x became SrFeO2 - a new compound with apparently infinite two-dimensional layers of iron and oxygen atoms, with each iron atoms lying at the centre of a square made up of four oxygen atoms.

’When you reduce these compounds with hydrogen you end up with elemental iron,’ said Werner Paulus of the University of Rennes in France, one of the members of the team. ’With the method we used you can stop the reduction in a more or less controlled way.’ Such a configuration has not been seen before for iron oxides and more closely resembles the sheet-like lattice geometry of superconducting copper oxides.

Furthermore, if the compound is heated gently it readily oxidises - demonstrating that oxide ions can be re-inserted into the lattice quite easily.

Grazia Francesconi, a solid-state chemist at the University of Hull, UK, was impressed by the work. ’The authors also show that, by careful control of the temperature and time, both the reduction and oxidation reaction can be stopped almost half-way through to give SrFeO2.5,’ she noted. ’The controlled preparation of a complex oxide with a two-dimensional structure and interesting magnetic properties from another oxide . will have a great impact on the academic community working in the areas of solid-state chemistry.’

’The high and controllable mobility of the oxide anions at low temperature can be exploited to reduce working temperatures in solid-oxide fuel cells and sensors,’ she added.