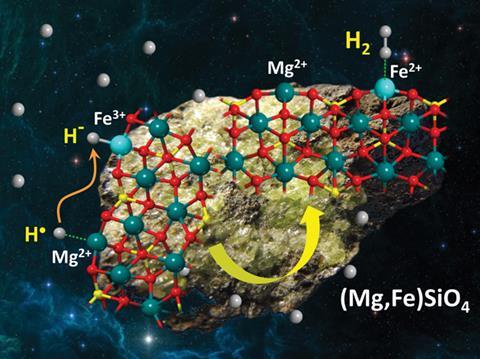 The average density of the interstellar medium is several billion times less dense than even the best vacuum chambers on Earth. Collisions between hydrogen atoms are therefore rare, and when they do occur, only one out of every 100,000 creates H2.

Despite this, the universe is abundant in H2. Although much research has investigated the role of silicate dust in uniting lone hydrogen atoms, most work to date has focused on pure magnesium silicate (Mg2SiO4).

Now, using density functional theory (DFT), Albert Rimola and his colleagues at the Autonomous University of Barcelona have discovered that even a small amount of Fe2+ in magnesium silicate grains plays a significant role in helping hydrogen atoms pair up.

The team analysed the electronic structure of the Fe–H interaction and found that it relies on a redox process, whereby hydrogen atoms are reduced to H–, and Fe2+ is oxidised to Fe3+, leading to a much stronger coupling than the Mg–H bond. When a second hydrogen atom is captured by a neighbouring Mg2+ ion, it swiftly combines with the iron-bound hydrogen to form H2. The strong Fe–H bond exposed by the team’s calculations suggests that Fe2+ can trap hydrogen atoms for a very long time, while they await their match in the cold vacuum of interstellar space.