US researchers have found a way to iron out graphene - sheets of carbon a single atom thick - by sticking them to flakes of mica. Rather than leaving ’ripples’ characteristic of graphene sheets, the technique produces ’ultra flat’ graphene which could be very useful for electrical applications.

’Free-standing graphene in its equilibrium state spontaneously forms ripples, which can affect its properties,’ says Tony Heinz, who led the research at Columbia University, New York, US. An important question to answer, he says, was whether this rippling occurred naturally, or was a result of being deposited on uneven surfaces.

’We wanted to know whether the  propensity for rippling was so strong that even if you had an extremely flat surface you would still get ripples,’ Heinz explains. ’In this case, we found a surface that was flat enough to fully suppress the ripples.’

The chosen surface was a mica material, consisting of aluminosilicate layers linked by single layers of potassium ions. Sheet silicate materials are known for their ability to split perfectly down the potassium layer - leaving an atomically-smooth surface. The team looked at graphene sheets - freshly peeled from graphite onto the smooth mica surface - and found that the height variation across the graphene layer only changed by about one tenth of an ?ngstr?m. 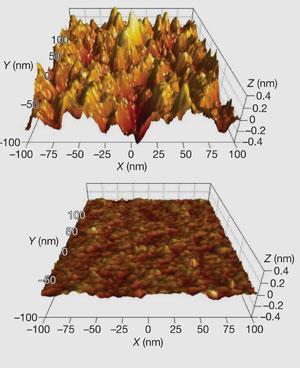 ’This study and work by others demonstrates that we can remove the pestering constraints of the ripples and be free to enjoy some of fascinating physics of a flat world of graphene,’ says Steven Louie at the University of California, Berkeley.

One example of the value of flat graphene is that it may have different chemical reactivity, Heinz says. Curvatures in the surface are more likely to encourage hydrogenation of the sheets, turning them into graphane. This can be seen in nanotubes and fullerenes, which are more susceptible to hydrogenation than graphene.

Un-rippled graphene may also have different electrical properties - but measurements of this will have to wait, as mica surfaces are insulating.