Analysis of carbon and nitrogen isotopes contained in the hair on an elephant's tail is helping explain the animals' feeding behaviour.

Analysis of carbon and nitrogen isotopes contained in the hair on an elephant?s tail is helping explain the animals? feeding behaviour, reports an international research team. 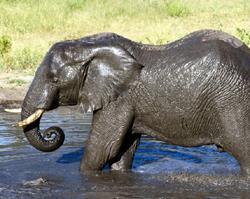 The researchers, led by geochemist Thure Cerling from the University of Utah, US, used global positioning system collars to track seven elephants in a Kenyan reserve. The animals? hair was sampled because it contains an isotopic record of the elephants? plant-based diet. Plants from dry areas have higher ratios of 15N to 14N than have plants from wet areas. Similarly, plants that use the so-called C3 photosynthetic pathway, including trees and shrubs, have lower ratios of 13C to 12C than have plants that use the alternative C4 photosynthetic pathway, including grasses and cereals.

Trees and shrubs are the dominant plants in this upland forest, but the carbon isotope ratios in tail hair from this animal showed that he was still consuming a large amount of grass. This implies that Lewis was conducting frequent raids into nearby farms and eating the cereal crops, which was seemingly confirmed when Lewis was subsequently shot and killed, presumably by a farmer.

Further research is now needed to determine what proportion of the elephant diet is based on crops. ?[This will] help resolve elephant?human conflict by quantifying the crop damage done by elephants,? said Cerling. Jon Evans