Drug degrades to produce nitrosamines, but the judge ruled the link between this and plaintiffs’ cancers could not be proven

A US judge has dismissed more than 5000 lawsuits against manufacturers of ranitidine after finding there was not enough evidence the drug was responsible for patients’ cancers.

Ranitidine, originally branded as Zantac, has been on the market for almost 40 years. It is used to treat indigestion, heartburn and acid reflux, and was the first drug to make $1 billion in sales. However, in 2019 the drug was found to be unstable, producing impurities of the carcinogen N-nitrosodimethylamine (NDMA). This prompted recalls of the drug and its removal from the market by the Food and Drug Administration (FDA) in April 2020. 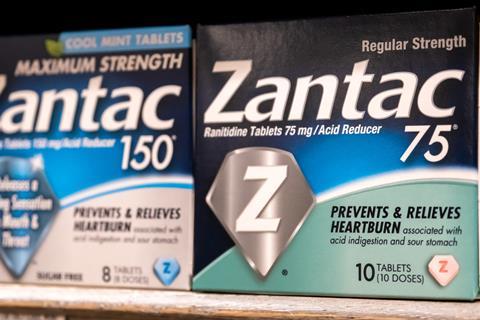 Ranitidine has been marketed for nearly four decades by several manufacturers and under a variety of brands, including Zantac

Following ranitidine’s withdrawal, lawsuits began to emerge against pharma companies by those who had taken the drug and later developed a range of different cancers. Given the drug’s widespread use, these were expected to cost ranitidine manufacturers, including GSK, Sanofi, Pfizer and Boehringer Ingelheim, billions in settlements. In August 2022, a lawsuit by a single patient in Illinois was settled out of court by generics manufacturers including Teva and Dr Reddy’s for a reported $500,000 (£404,000).

However, in hearing the multi-district legislation (MDL) – a mechanism which consolidates similar cases together in a single ruling – South Florida judge Robin Rosenberg found in favour of the manufacturers. In her 341-page judgment, which covers all ranitidine cases in the US Federal legal system, Rosenberg said the plaintiffs ‘have not met their burden to show that their experts relied upon any form of reliable primary evidence in support of their general causation opinions’.

GSK welcomed the ruling, saying it ‘reflects the state of that science and ensured that unreliable and litigation-driven science did not enter the federal courtroom.’

However, this is not the end of potential Zantac litigation. The Rosenberg finding could be appealed, and although her ruling affects all federal cases, suits can still be brought through the US state system, with the first of four trials in California set to begin on 13 February 2023. Filings have already been made in other states, including Pennsylvania and Delaware, and a further 50,000 cases are expected from cancer patients from all 50 states.

Nor are the lawsuits likely to end with ranitidine. The sartan family of blood pressure medicines, particularly valsartan, have also triggered recalls after being found to contain NDMA, this time through contamination during the manufacturing process in some suppliers. Currently more than 1100 Federal lawsuits in the US are pending around the potential link between cancer and the use of sartans. These are due to be heard in a second MDL, this time in New Jersey. A date for the hearing has not been set.