Keeping the heat up for super-efficient solar cells

US scientists have found a way to siphon off the ’hot’ electrons that are responsible for much of the energy lost in current solar cells. The research could lead to the development of far more efficient photovoltaic materials - theoretically doubling the proportion of solar energy that can be converted into electric power.

In current silicon solar cells, only around a third of the energy that hits the cell is converted into electricity. Much of the energy delivered by the incoming photons is lost as heat - so-called hot electrons are generated, which cool extremely rapidly. Thus, their energy cannot easily be put to good use.

As Zhu explains, hot electrons are known to stay hot for longer in nanomaterials, giving just enough time - hundreds as opposed to only a few picoseconds - to capture them. His team deposited semiconducting lead selenide nanocrystals (quantum dots) on titanium dioxide, an electron conductor, and used a technique called optical second harmonic generation that allowed them to ’watch’ the hot electrons moving across the interface between the two materials. 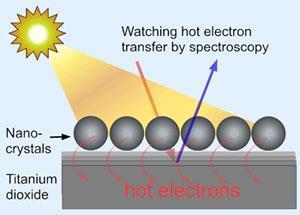 Source: © University of Texas at Austin

The team discovered that hot electrons can be transferred from photo-excited lead selenide nanocrystals to an electron conductor made of titanium dioxide. Their discovery points the way toward more efficient solar cells

Although the team have not yet demonstrated a working solar cell, they say that their method might eventually make it possible to increase efficiency to 66 per cent. ’It’s a very exciting implication, but this is only one scientific step,’ says Zhu. ’What we are doing now is trying to adjust the interfacial chemistry so that we only take the electrons with the energy we want - then we don’t lose any excess energy. And of course if we can do this, then comes the real hard work of engineering.’

Rolf Crook, a solar energy expert at the University of Leeds, UK, says that while major technological hurdles remain, the work is a key advance. ’They present the exciting, significant, and convincing case that hot electrons can transfer from nanocrystals to bulk contacts in less than 50 femtoseconds,’ he says. ’This timescale is critical. It means we can contemplate a new design of solar cell, where nanocrystals share the energy of photons, with a conversion efficiency which far exceeds that of typical solar cells available today.’