European scientists have modified an old experiment and converted pneumatic pressure into electrical power, which could one day help power microfluidic devices. 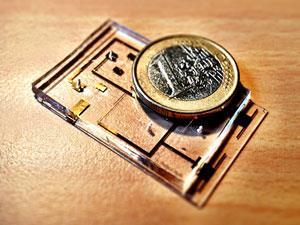 In 1867, William Thomson (Lord Kelvin) invented his classic water dropper to demonstrate how charges can be spontaneously created in clouds. But, the device has remained little more than a classroom demonstration and its potential to deliver useful electrical energy has remained unrealised.

In the classic experiment water streams are dropped through conducting rings into buckets below. The buckets and rings are electrically connected and once a spontaneous charge exists in one system the droplets help amplify the effect until a big enough voltage is created for sparks to form between the two charged bodies.

Hoping to use the same principle to power microfluidic devices, a group of scientists across Europe have miniaturised the Kelvin water dropper down to just larger than a coin. The team, including Álvaro Marín (currently at Bundeswehr University Munich, Germany), made the microfluidic version with two drop generators and a pair of electrodes on each side acting as induction electrodes. The device charges picolitre sized droplets at a rate of 103 droplets per second, using pneumatic force to move the droplets within a microfluidic chip instead of gravity. A second pair of electrodes further down the stream receives the charge, creating a potential difference.

So far, the system has created currents in the order of 0.5 nA and Marín explains that ‘the scale-up would be relatively easy to do by simply adding more microfluidic modules.’ This could improve energy conversion and make useful electrical energy output a reality.

Thomas Jones, a leading researcher in microelectromechanical systems and droplets at the University of Rochester in the US says he believes ‘the microfluidic Kelvin dropper may prove to be an icon of microelectromechanical possibilities.’ Jones also adds the device ‘may lead to the development of on-chip high voltage supplies to drive electrowetting and liquid dielectrophoresis devices.’

However, energy generation is just one possible application of the work, says Marín. As well as droplet charging, droplet break up can be induced and by altering the configuration of the electrodes and microfluidic channels, the degree of charging or break-up can be controlled. This suggests the dropper could also be used to seperate ionic species for analysis or to help physicists explore the droplet breakup effect.

Having built a prototype to demonstrate the phenomenon, Marín acknowledges that the challenge is to quantitatively measure the charging state of the droplets and how that can be changed by different parameters