Killing three parasites with one stone

Despite being the focus of much recent research, it is estimated that over 400 million people are currently infected with malaria, schistosomiasis or hookworm. As an attempt to help remedy this, scientists in the US have developed a hybrid drug that is active against all three of these parasitic diseases.

Although a variety of approaches have been developed for the treatment of these diseases, there are often toxic side effects associated with the drugs and widespread resistance to frequently used molecules has developed. To help improve the drugs on offer for those infected, Bryan Mott at the National Institutes of Health, and co-workers, have been investigating combined therapeutics, which can be especially useful for multiple parasites endemic in the same region. 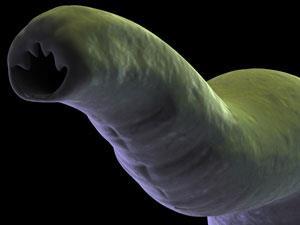 Over 400 million people are infected with malaria, schistosomiasis or hookworm (shown)

The group developed a hybrid drug containing two heterocycles: furoxan and quinoline. The researchers had previously seen that furoxan had demonstrated significant anti-parasitic activity and quinoline has also shown promise in the chemotherapy of a variety of other diseases. It is likely that quninoline works by a different, perhaps complimentary, mechanism to furoxan, therefore the group’s rationale was that the combination of the two molecules could be beneficial.

Pradip Rathod, an expert in malaria research at the University of Washington, US, compliments the idea and says that ‘multitargeting inhibitors raise the bar for achieving acceptable potency against all diseases’. However, he does mention that although the current lead compound is active against all three targets, it is ‘many orders of magnitude less potent against worms than against malaria parasites’.

Although Mott’s group is no longer pursuing this specific chemotype as no exceptional improvement in activity was achieved in this study, Mott mentions that further improving the activity wouldn’t be ‘terribly challenging’ as there many known structural changes for these classes of molecules that enhance antiparasitic activity and to incorporate them would be ‘fairly easy’.

‘The truly good news is that medicinal chemists are thinking out of the box to meet global health needs,’ says Rathod.