Knighthood for services to chemistry

Fraser Stoddart, director of the California NanoSystems Institute and professor of NanoSystems Sciences at the University of California, Los Angeles, has been appointed a Knight Bachelor in the Queen’s New Years Honours List, for his services to chemistry and molecular nanotechnology. 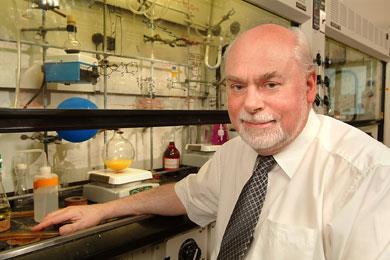 Were you surprised to get the knighthood?

I was very surprised. People who have written to me have commented that fewer and fewer knighthoods are given to people who have achieved in the sciences themselves. One person went so far to say it was double an honour to get a knighthood based not on service and political activity within science, but just for the doing of the science itself. And I’m not unique in that respect - I note with a lot of pleasure that Jim Feast [RSC President] also gets a CBE for his contributions to polymer science.

Do you find your American colleagues are more impressed than your British ones?

Americans are always pretty upbeat, and gongs are more commonplace here in the US than they are in any other part of the world in chemistry, so we’re constantly celebrating with colleagues who are successful in getting the prize of the moment. There’s a very positive culture here, but I think it’s equally positive in the UK.

You’re cited for molecular nanotechnology: how do chemists perceive nanotech?

The researchers who are soaring up the ISI’s 100-most cited chemists’ list, almost without exception, embrace nano in their research. Over the past 20 years chemistry has begun to look outside its own box - to physics, engineering, medicine, biology and so forth. I really welcome that change: it opens up doors for new discovery and creativity - and nano has been the catalyst above all others to open these doors.

I think there’s a great need to move onwards and upwards into the nano world. That’s what I’ll be driving my colleagues to think about under the banner of ever-increasing complexity that will lead to emergent phenomena. If chemistry doesn’t move on from the patches that it has very comfortably and elegantly built up and been successful in then the other cognate sciences will move into the areas where chemical science should be going today.

What exciting chemistry are you working on at the moment?

The excitement in chemical synthesis is to reach out to much bigger structural arrays. We have a lot of work going on that is rather fundamental to the making of novel interlocked molecular species - catenanes, rotaxanes, rings and knots and so forth. And for these species, dynamic chemistry has to be brought into the equation much more. Synthesis has been largely carried out in the past under kinetic control, which is fine, we’ve made a lot of progress there. But it’s very artificial, very much a case of you get what you get, and with lots of by-products from which there’s no going back. Whereas if you approach synthesis under thermodynamic control, you’re making things and breaking them apart until you reach the thermodynamic minimum. It’s important that people are prepared to exploit different ways of making chemical structures.

The other challenge that catches my imagination is finding applications for my chemistry. We are working on molecular memory and logic, both of which depend on our ability to make tiny molecular switches. These switches have also been included in molecular machines, such as our nanovalves: switchable rotaxane molecules attached to spheres of porous glass. These functioning nanoparticles can cross cell membranes and are being adapted for drug delivery and diagnosis of degenerative diseases. I see machines like these, which we can control with pH or light, as a real growth area in applied nanochemistry.

And would you rather have a knighthood or the Nobel Prize?

That’s a really tricky question. Whatever comes is nice. But I also lost my wife, Norma, from cancer three years ago and I would send all these gongs back just to have my wife back beside me. So let’s keep it in perspective - it’s nice to have them professionally from the point of view of promoting the young people that work with you. But in a personal sense, I’m fairly detached from it. It’s like water off a duck’s back. It’s more what it says about the people around me. I’ve been blessed through 35 years with some of the brightest young men and women on the planet coming to Sheffield, Birmingham, and latterly to Los Angeles to work in my research group. Some of them are achieving on a scale that is going to outstrip anything that I have accomplished, and that gives me a huge amount of pleasure.