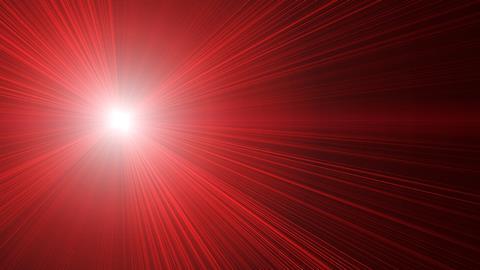 ‘This is the first time anyone has been able to control the spatial orientation of chiral molecules with light,’ says Ilya Averbukh from the Weizmann Institute of Science in Israel. His theory group teamed up with Valery Milner’s experimental team from the University of British Columbia, Canada, to build a laser setup called an optical centrifuge that can spin chiral molecules depending on their handedness.1

‘It was long anticipated, but never achieved,’ Averbukh says. Eventually, an optical centrifuge could even be used to separate enantiomers. 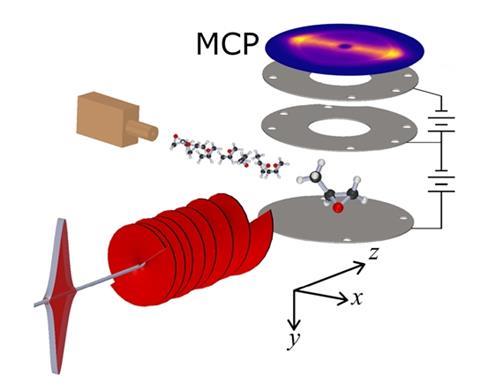 The experimental setup of the optical centrifuge. Propylene oxide molecules in a seeded molecular jet were spun in an optical centrifuge (long corkscrew) at less than 5K and Coulomb exploded with a probe pulse (short diamond) between the plates of a conventional velocity map imaging spectrometer, equipped with a multichannel plate (MCP) detector and a phosphor screen

The idea of an optical centrifuge was first proposed in 1999. It consists of a short laser pulse of linearly polarised light, meaning its electric field sits in a single plane. As the light propagates, its electric field then starts to rotate, first slowly, then faster and faster – eventually spinning at two trillion revolutions per second.

If the light hits a container of very cold gas – low temperatures keeps the molecules from spinning too wildly – the molecules align and rotate with the centrifuge’s electric field. The spinning molecules experience extreme centrifugal forces that scientists hope to break bonds with or use to separate lighter from heavier compounds. But until now, this idea was confined to theoretical studies.

A team around Averbukh and co-leader Milner has for the first time controlled chiral molecules – propylene oxide – with laser light. When a mix of enantiomers is loaded into an optical centrifuge, some molecules are caught by the centrifuge field, line up with it and start spinning depending on their handedness.

‘At the moment, the effect is very small, only 1%,’ Milner says. ‘This means if there are 100 molecules of one enantiomer, 99 rotate randomly and one is oriented by the centrifuge. The same is true for the other enantiomer, but the orientation is opposite.’

To prove that the effect, while small, is real, the researchers spent a year refining their detection method. They finally found that a Coulomb explosion – a laser pulse that ionises and scatters molecules in just a few thousand trillionths of a second – allows them to image the molecules and calculate their rotational orientation.

Juan Omiste, who studies optical centrifuges theoretically at IMDEA Nanoscience Institute, Spain, calls the study ‘a great achievement’. ‘We are really opening the doors to a new scheme for controlling molecular dynamics in a way that has never been done before.’

Although this is early days for optical centrifuge technology, the team hopes that it could one day be used to separate enantiomers. ‘Maybe, with a properly modified setup, it could be possible,’ Milner says.

One such setup was theorised by Andrey Yachmenev and his team from Germany’s synchrotron facility, DESY.2 By adding a static electric field to the centrifuge, the entire setup becomes chiral, and the molecules become what he calls field-induced diastereomers. As the field diastereomers have different rotational excitation dynamics, ‘we excite different enantiomers into different rotational states and separate them in space’, Yachmenev says. At ultra-low temperatures, this could translate into 30% enantiomeric excess.

Yachmenev says that his team is keen to put theory into practice, but ‘the optical centrifuge is a notoriously difficult tool to set up in the laboratory’. ‘There are only two or three groups in the world that have such a device,’ Omiste points out.

However, Omiste is sure that scientists will keep working on this potentially powerful technology. ‘In the future, we will be able to separate chiral molecules by using laser fields,’ he says. And it might even be possible to induce enantioselective reactions with just light. ‘We know molecules do react differently on their orientation during the reaction, so in theory there’s nothing that says it’s impossible,’ Milner says.

Correction: The article was updated on 24 June 2019 to alter which team was responsible for which part of the work