Scientists from China, the US and Peru claim to have successfully treated late-stage breast cancer patients using laser immunotherapy to stimulate patients’ own immune systems to fight the cancer.

Wei Chen from the University of Central Oklahoma and colleagues used laser immunotherapy to treat 10 patients from Peru, aged 36 to 85, considered to be out of other treatment options. Tumour metastasis - when the cancer spreads from one part of the body to another - is the major cause of treatment failure for cancer patients, says Chen. Initial results of this pre-clinical study have shown that it can reduce primary tumours and metastases with fewer side effects than traditional treatments.

The team injected a light-absorbing agent into the patient’s body and directed non-invasive laser radiation onto the area - the interaction between the two heats up the target tissue. This doesn’t result in complete destruction of the tumour cells, but it can cause the cells to swell and break down, which stimulates an immune response. Then they injected an immunoadjuvant into the centre of the tumour, which enhances the immune response. They studied the effects over a year using biopsies and medical imaging. 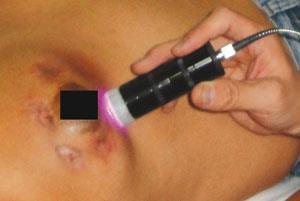 The therapy is nontoxic, tolerated well by patients and no harsh side effects were observed, apart from local reactions such as pain, redness, swelling and skin blistering caused by the heat of the laser, but these healed quickly.

Mladen Korbelik from the British Columbia Cancer Agency and the University of British Columbia, both in Vancouver, Canada, thinks that the work is ’highly innovative and potentially groundbreaking’. However, he says that the mechanism is yet to be fully elucidated. He suggests that ’it appears to involve a presentation of multiple tumour antigens in the fashion of an autologous cancer vaccine [vaccines that contain inactivated tumour cells to elicit an immune response]’. Tailoring the antitumour action to individual patients, similar to photodynamic therapy-generated vaccines, elicits a strong immune response directed specifically at the patient’s tumours, he adds.

Chen plans to apply to the US Food and Drug Administration for approval to conduct human trials in the US. ’We plan to develop laser immunotherapy into a mainstream, worldwide therapy,’ he says, adding that he hopes to use it for other cancer types such as melanoma, lung, prostrate and colorectal cancers. ’Another goal is to introduce the therapy to developing countries, since the therapy only requires simple facilities and equipment,’ he concludes.