Leap of faith pays off for MR research 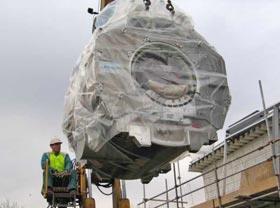 The centre brings together clinicians and physicists to develop MR techniques for diagnosing and researching a range of diseases. ’This is an important interface between mainline medicine, and research, and physics,’ the director of the centre, Roy Taylor, told Chemistry World.

Taylor started the project by first gathering ?2 million from charitable donations, and a donation from a patient. With this money he approached the University of Newcastle, after persuading MR physicist Andrew Blamire from the University of Oxford, UK, to join him. ’Blamire took a bold leap of faith, in believing me that I could complete the fundraising,’ Taylor said.

Taylor’s ?2 million prompted Newcastle to invest money awarded by the Higher Education Funding Council for England’s Science Research Investment Fund. In total, ?5 million was needed to build the centre, which will be staffed in the first instance by Taylor, Blamire, a lecturer in MR physics, and four postdoctoral researchers.

Taylor has for 10 years built MR’s reputation in Newcastle, and the UK, by collaborating with MR experts at the University of Nottingham, UK, and Yale University, US. ’This has helped us demonstrate the power of this technique and has given us the necessary track record to be able to go to funding bodies to say this is solid, this is real,’ said Taylor.

The centre has now attracted over ?2 million in research funding, including a number of Medical Research Council grants.

The first projects will use MR to study diabetes, cirrhosis, muscular dystrophy and dementia.

Taylor’s work focuses on diabetes, and on tracking metabolic changes directly after eating. He uses MR-active 13C labelled compounds, such as glutamate, to track intermediary molecules involved in metabolism. These intermediaries are important for working out how carbohydrate is burned or stored in the body, he said. With MR it is possible to measure the rate at which the main energy compound in the body, ATP, is generated in liver or muscle tissues.

As with standard nuclear magnetic resonance, clinical MR measures hydrogen, as well as isotopes of phosphorous, oxygen and other MR-active elements. David Jones, a collaborator from the University of Newcastle and Freeman Hospital, Newcastle, has one of the MRC grants to investigate the possibility that manganese accumulation in the brain causes the severe fatigue associated with some forms of cirrhosis.

Volunteers will now be invited to take part in studies at the centre. Blood sampling and psychometric testing can be done on site. The centre has one MR magnet in place and space for another, which Taylor hopes to have installed in three years.