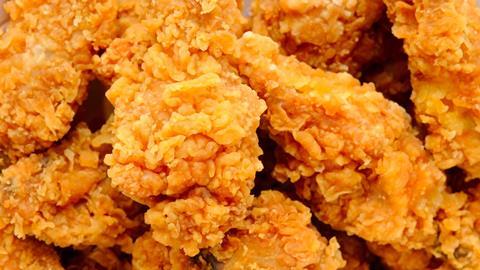 Lemony chicken and a series of fortunate flavours

‘This was a serendipitous discovery,’ says Robert Cannon, whose team at International Flavors & Fragrances (IFF) in the US ‘took a deep dive into the unique flavour profile of fried chicken’ to discovered several lemon-scented thiophenes. The compounds could replace citral, a common lemon flavour whose instability has dogged food chemists for years.

Sulfur compounds are known for their savoury odours at best – for example in cheese or garlic – and nausea-inducing smells at worst – think rotten eggs. Cannon’s team, however, found that certain sulfur-containing heteroaromatics, extracted from fried chicken made according to their own recipe (see box), can have rather pleasant aromas.

Odour and taste tests revealed that some chicken thiophenes – such as 3-pentyl-2-thiophenecarbaldehyde – were floral, fresh and lemony, and not dissimilar to citral, the terpenoid that gives citrus fruits their aroma. Although finding a fruity notes in savoury dish might be unusual, it ‘is quite normal when working with complex matrices’, says Montserrat Mestres Solé of the instrumental sensometry group at the Public University of Tarragona in Spain. ‘This is because when you smell any foodstuff, the odour that you perceive is not due to a single compound but it is due to the interaction of several different aromatic compounds,’ she adds.

Cannon speculates that the thiophenes are formed when the frying process triggers degradation of cysteine, a sulfur-containing amino acid. ‘Process flavours – meaty flavours coming from barbecuing, roasting or cooking – are usually generated through the Maillard reaction, which results from the interaction of reducing sugars and amino compounds,’ explains Varoujan Yaylayan from McGill University in Canada who researches aromas produced by cooking and baking.

In terms of stability, IFF’s thiophenes outperform citral, which easily degrades in acidic conditions and at elevated temperatures. ‘A lot of applications involve thermal processing or high acid mediums, and it has been a major challenge for the flavour and fragrance industry to stabilise or find replacements for citral,’ Cannon explains. Encapsulating citral or adding antioxidants to foodstuff can only slow, not prevent, the natural product’s degradation. The chicken thiophenes, however, don’t lose their aroma even after being stored at 38°C for three weeks.

Whether the chicken thiophenes really have the potential to replace citral depends on how similar their aromas are to the real thing, says Yaylayan. ‘A very careful study will be necessary to determine the interaction of thiophenes with the other components of the food in order to determine the final aroma,’ Mestres Solé adds.

The original recipe was devised for 17kg of chicken – we scaled it down so you can try it out at home.

In a cast-iron pan or deep fryer, heat enough unflavoured canola oil to cover the chicken completely. Once the oil reaches 163°C, add the chicken and fry for approximately 25 minutes until it reaches an internal temperature of 74°C. The oil should stay between 143°C and 163°C throughout the process.