Sweeping reform to relax UK libel laws could protect scientific academics and journalists from being ’bullied into silence’ at the prospect of costly legal battles with big businesses or wealthy individuals when they speak out in the public interest. 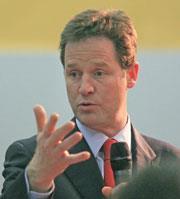 In a speech on civil liberties on 7 January, Nick Clegg, the deputy prime minister explained how a new draft defamation bill due to be published in the spring will provide a new statutory defence for scientists and journalists who legitimately speak out about important issues. ’Our aim is to turn English libel laws from an international laughing stock to an international blueprint,’ said Clegg.

Clegg highlighted that English libel laws at present are restricting scientific debate and investigative journalism. ’We want public-spirited academics and journalists to be fearless in publishing legitimate research. Not least when it relates to medical care or public safety,’ he said. But he also emphasised that individuals and businesses must be able to protect their reputations from damaging and untrue statements.

Science writer Simon Singh, who endured a lengthy court battle with the British Chiropractic Association after questioning the medical evidence behind some of its claims in a newspaper article, believes libel reform is vital.

’The devil will be in the detail, but I am optimistic that both Nick Clegg and Lord McNally, minister of state for justice, are committed to libel reform,’ he tells Chemistry World. ’Of course, there will be vested interests who will lobby against libel reform, so the libel reform campaign will continue to work hard in order to make sure that Parliament delivers a radically reformed and fair libel law. The scientific community has played a crucial role in pushing libel reform up the political agenda, but the battle is not over,’ he adds.

In our modern society internet publishing has made it very easy for anyone to have their say. Clegg explained that the coalition government will clarify the law around the existing defences of fair comment and justification and will address the high costs of defamation proceedings. ’And we’re going to look at how the law can be updated to better reflect the realities of the internet,’ he said.

David Allen Green, head of media law at London-based legal firm Preiskel & Co is impressed by the commitment to a public interest defence and the acknowledgement that it should cover bloggers as much as journalists. ’It should make science writing and blogging much safer.   However, it’s the practice of libel litigation as much as its substance which needs to change,’ he tells Chemistry World.   ’One hopes legal reform brings a cultural shift.’