Life in a CO2 lake

A microbial community able to survive in the sediments overlying a deep-sea liquid CO2 lake could serve as a natural laboratory for studying the impacts of deep-sea CO2  storage on marine life, report Japanese and German scientists.

The team of microbiologists and geochemists unwittingly discovered the liquid CO2 reservoir during expeditions to the Okinawa Trough east of Taiwan. While studying the microbes in the vent fluids and sediments of black smokers in the Yonaguni Knoll IV hydrothermal field, the scientists noticed the emission of liquid CO2 droplets from the sediments. Just south of the hydrothermal vents, the team found a liquid CO2 lake lying beneath a thin layer of sediments.

The seafloor in this location lies at a depth of about 1380 metres. At this depth, liquid CO2 is less dense than water and should not be able to form a pool. The researchers found that a layer of CO2  hydrates under about 30cm of sediments formed a cap over the lake and allowed the liquid CO2 to accumulate. 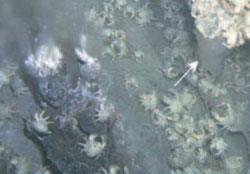 Large amounts of CO2 from hydrothermal activity have stagnated in the sediment, cooled down, and formed a CO2 lake. Microorganisms are present that may play a role for the feedback of greenhouse gases into the biomass. (PNAS)

’During the past decade, no liquid CO2 environments have been found,’ Fumio Inagaki, a geomicrobiologist with the Japan Agency for Marine-Earth Science and Technology in Yokosuka and lead author of the study told Chemistry World. ’The sediment hosted CO2 lake we found is a unique setting since it requires strong hydrothermal activities and sediments,’ he explained.

Inagaki and colleagues collected samples at the liquid CO2/CO2-hydrate interface and in the overlying sediments, and analyzed them for microbial presence and activity. The dominant microbes detected in the samples were capable of assimilating one-carbon compounds such as CO2 and methane (CH4).

’This community looks like something new based on the DNA research and may play a role to feedback greenhouse gases such as CO2 and methane into their biomass,’ said Inagaki.

In an effort to mitigate the climate effects of rising CO2 emissions, some scientists have proposed using the oceans for long-term storage of the chemical. The environmental impacts of deep-sea CO2 storage are not well understood but since the dissolution of CO2 in seawater lowers pH, the concern has been raised about the consequences of such a change on deep-water communities.

’The fact that liquid CO2 lakes exist naturally and do not become catastrophic death zones suggests that those concerns may not be founded,’ said Ken Caldeira, a chemical oceanographer with the Carnegie Institution in Stanford, California.

’I think Mother Nature gives us some hints for storing CO2  in the deep-sea,’ said Inagaki. ’However, to realize the plans, we should also think about the consequent biological effect after disposal and microbial functioning.’