An implantable power source for nanorobots and pacemakers implanted beneath skin 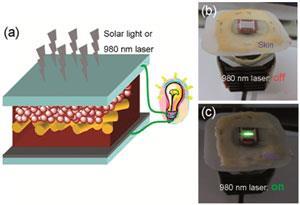 Scientists in China have created a laser-driven photovoltaic cell that can produce electrical power for nanobiodevices implanted beneath the skin.

Wireless nanobiodevices, such as nanorobots and cardiac pacemakers, are currently limited in their applications by their requirement for power. Nanogenerators that convert mechanical energy into electrical power have been investigated, but the output power is too low for many medical nanobiodevices, and biofuel cells that use chemical energy to provide power are severely limited by the in vivo environment of the devices.

Photovoltaic cells as a power source have previously been limited by low light conversion efficiencies and their lack of biocompatibility. However, Zhigang Chen of Donghua University, Shanghai, and colleagues have improved the conversion efficiency of their dye-sensitised solar cells such that, even through layers of skin, the laser light produces enough power for such devices.

The team improved the cells’ efficiency and biocompatibility by changing two of the cells’ components – the rare earth nanophosphor (NaYF4:Yb,Er – the part responsible for converting low energy light to high energy light, known as up-conversion) and the electrolyte. ‘We improved the nanophosphors’ up-converting luminescence properties in a one-step synthesis,’ says Zhigang. They did this by increasing the amount of ligands on the nanophosphor’s surface, which decreased surface defects, and by increasing the reaction time, which led to the formation of nanorods. Both actions improved the luminescence efficiency. They found that the cell was almost twice as efficient as previous nanophosphors formed in two steps.

To test the cell under skin, the team covered the cell in a layer of chicken skin and used a laser intensity that is safe for human exposure (720 mW cm-2). They found that the new cell outputs a maximum power of 22.2µW, ‘which is efficient enough to power many kinds of in vivo devices’, says Zhigang.

Richard Brutchey, an expert in inorganic nanomaterials for photovoltaic applications at the University of Southern California, US, says that the work is ‘a good step forward toward developing implantable bioelectronics, however, an external power source is still required (ie light)’. He says that the next step would be to increase the power output to compete with the peak power of implantable fuel cells and to make the device fully biocompatible.