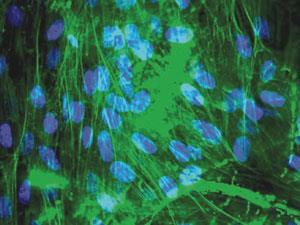 ‘Skin tissue-engineering involves the use of scaffolds that support cell attachment and proliferation, together with the formation of skin tissue-like structure to substitute the skin,’ say Molamma Prabhakaran, Seeram Ramakrishna and colleagues from the National University of Singapore, who carried out the research.

With their new scaffold, the team have shown that human fibroblasts (cells that play a critical role in wound healing) grow and replicate more quickly under either light emitting diodes or a solar simulator, whilst keeping cell morphologies similar to those grown on tissue culture plates (these were used as a control test). The scientists explain that the photovoltaic polymer (poly(3-hexylthiophene)) converts optical energy from the light into electrical energy.

Rachel Lubert, an expert in the area of visible light-tissue interactions from Bar-Ilan University, Israel, says that the scaffold might have a great impact on wound healing. The technique could be used to regenerate nerve or bone cells, adds Lubert, and to promote the proliferation of mesenchymal stem cells (connective tissue cells that can become different cell types, such as bone cells, cartilage cells or fat cells).

‘As there are lots of electrical signal transfers in cardiac, nerve and muscle tissues, the photosensitive scaffolds could assist these transfers and stimulate proliferation and differentiation of relative cell lineages,’ says Prabhakaran. He adds that this research could be the beginning of investigations into using biomaterial scaffolds for multiple-stimulation therapy in tissue engineering.