Lighting the way to explosive detection 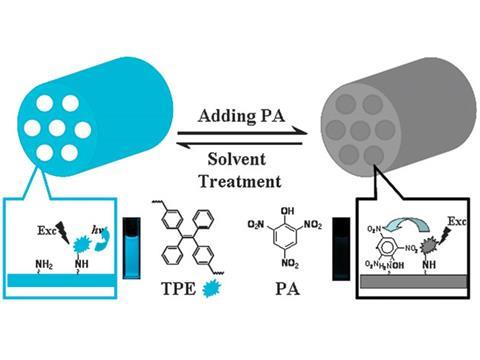 A reusable fluorescent sensor that detects explosives in groundwater or seawater could aid antiterrorist activities and environmental protection, say scientists in China.

Many techniques have been used to detect explosives, including gas chromatography, Raman spectroscopy and fluorescence spectroscopy. The latter is considered the most useful because of its simplicity, high sensitivity and low cost. With this technique, fluorescent dyes are incorporated into a solid matrix on which they interact with the explosive molecules, causing them to fluoresce.

However, the dyes often aggregate within the matrix, leading to a substantial decrease in fluorescence, known as quenching. This loss of efficiency and sensitivity motivated the discovery of molecules whose fluorescence is turned on by aggregation rather than suppressed. Materials based on such aggregation-induced emission (AIE) luminogens (luminescent compounds) have shown promise in explosive detection in organic solvents. Dispersion in aqueous solution has, until recently, proven difficult.

Jihong Yu and colleagues at Jilin University, Changchun, and The Hong Kong University of Science and Technology, Kowloon, have extended the applicability of AIE luminogens to explosive detection in aqueous natural environments. Their solution was to use a porous material as the solid matrix, allowing the luminogen to interact efficiently with the explosive in or on the pore walls. The material ‘takes advantage of the unique properties of AIE luminogens and porous materials that can enhance mass transport and strengthen interaction with adsorbed explosive molecules,’ Yu explains.

Yu’s team demonstrated the sensor by detecting the model compound for explosives – picric acid. They found that it displayed sensitivity comparable to that of non-aqueous explosive sensors. Its sensitivity in water is also several times higher than that of a fluorescent silafluorene copolymer–nanoporous silica hybrid, which was developed recently as a sensor by William Trogler, University of California, San Diego, US.  According to Trogler, ‘[Yu’s] system has additional advantages due to the increased chemical stability of the fluorescent material used and the reversibility of the sensor, which allows regeneration’.

The recyclability of the material is a key factor in its future utility. Yu demonstrated it has a stable performance over at least five cycles and can be reused after simply washing in solvents. ‘The key unknowns at this point are the selectivity of the sensor in terms of the range of explosive types detected and possible interference from aquatic environmental contaminants,’ according to Trogler.

‘We are now preparing different types of AIE-luminogen functionalised mesoporous materials for the detection of various explosives,’ says Yu.