Scientists have generated high resolution images of lithium ions being deposited on a single nanowire anode, revealing how the material grows and flexes in response to charge. The US and Chinese researchers say the technique will help in the development of more advanced battery systems in the future.

Lithium ion batteries are widely used, but as they are charged and discharged the anode material inside the batteries undergoes large volume changes, which leads to strain in the material causing it to break up. Nanowire anode materials are able to charge and discharge without this breaking thus prolonging the battery’s life, but the mechanisms involved were unknown until now.

An international team led by Jian Yu Huang from Sandia National Laboratories, in Albuquerque, US has now observed the lithiation and delithiation (charging and discharging) of a nanowire electrode in an electrochemical cell by placing it inside a transmission electron microscope (TEM) that produces images of the nanoscale process in real time, enabling the team to see the electrochemical reaction occurring at a single particle level.

The team’s electrochemical cell consists of a tin oxide (SnO2) nanowire anode - a fairly common new material, lithium cobalt dioxide (LiCoO2) cathode and an ionic liquid containing a lithium ion salt as the electrolyte. Previous attempts to observe these reactions inside a TEM were prevented because traditional ethylene carbonate based liquid electrolytes would evaporate in the high vacuum conditions used. The very low vapour pressure of the ionic liquid means minimal evaporation occurs, solving this problem. 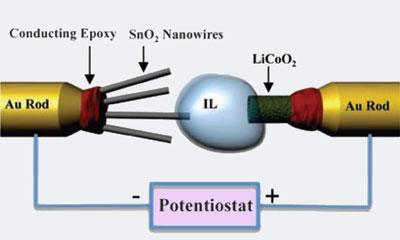 The SnO2 nanowire is attached to a scanning tunnel microscope (STM) tip, allowing the anode to be easily positioned in the ionic liquid, completing the electrochemical cell. A negative potential is then applied to start the electrochemical reaction. This draws the lithium from the cathode, through the electrolyte to the anode where it is deposited.

As the reaction takes place TEM images show that lithium enters the nanowire along defect channels and the anode becomes distorted, becoming significantly longer but only slightly wider, with the nanowire volume more than doubling.

John Sullivan, one of the research team, explains that even when the whole nanowire was totally immersed in the ionic liquid, lithiation primarily resulted in elongation with relatively little radial swelling. ’We speculate that the strain energy to lengthen the wire is less than the strain energy to expand it as the elongation is always moving away from the reaction [defect] site,’ he says.

’The findings have implications on how material would behave as real electrodes in batteries,’ says John Owen, a lithium ion battery expert at the University of Southampton in the UK. ’It would be very interesting if they could do the same thing with silicon nanowires as silicon is the material of greatest interest for batteries,’ he adds.

Sullivan explains that in the future this new technique will indeed be used to observe the electrochemical reactions of other electrode materials like silicon, in order to develop more advanced high performance batteries.