Our news story on the three winners is now online. Stay tuned for our feature length story on the discovery and the people behind the work.

It seems the people behind the Faraday Discussions forums have scored something of a coup by fortuitously securing two of this year’s chemistry laureates to talk at the meeting in September next year. Both Hell and Moerner will be there.

As is so often the case it seems The Simpsons were ahead of the curve… Well done Milhouse! 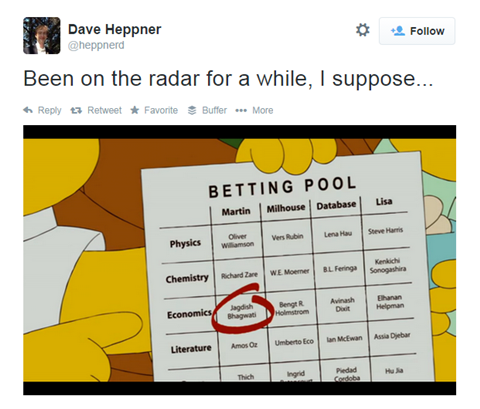 As is often the case with Nobel laureates, they’ve previously won some of the other prizes on offer. A look back through our archives reveals WE Moerner won the Wolf prize back in 2008, and Hell won the 10th Innovation Award of the Federal President of Germany in 2007 (as well as the Kavli prize this year). It’s those kinds of prizes that put them at the top of ChemBark’s odds list (see 9.41am update for more).

So there it is: ‘the development of super-resolved fluorescence microscopy’ takes the prize! Huge congratulations to Eric Betzig at HHMI’s Janelia Research Campus, along with Stefan W Hell and William E Moerner at Stanford. It should be noted that ChemBark had single molecule spectroscopy at the top of his list - congratulations! We’ll be posting a news article and more comment as the day goes on.

The work of these scientists opened up new frontiers in the study of life by overcoming a problem that many thought was insoluble. The techniques they came up with overcame a physical limit that meant that optical microscopes could only image objects down to 200nm - or approximately half the wavelength of light. With clever use of fluorescent molecules they were able to get around this limit in one of two different ways. The first used a laser to excite fluorescent molecules within a sample and then a second to cancel out some of the fluorescence surrounding that glowing point. This allowed scientists to substantially increase the resolution of an image produced by an optical microscope. The second relies on an ability to selectively turn on some fluorescent molecules within a sample, but not others. By imaging an area multiple times with different molecules fluorescing researchers are able to build up a detailed picture of a sample down to the molecular level.

Some activity in Stockholm and shuffling of chairs. Apparently there’ll be a delay of 5-10 minutes. Can’t get a good line to the right people? The press conference can be viewed below. Anyone’s phone ringing???! TV vans outside KAIST where Ryoo Ryong (mesoporous materials) is apparently, but we don’t think they know something we don’t. They’re just hedging their bets.

10.28am What the tweeps are saying

John Goodenough, the guy behind the lithium-ion battery is proving a popular prediction on Twitter. The Goodwin group at Oxford note that if he won he’d be the oldest recipient of the chemistry prize at 92.

Or wild speculation(?) from the mostly well informed people over at Reddit in /r/chemistry.

10.08am Less than three-quarters of an hour to go

You can watch the (often notoriously buggy!) web feed from the Nobel prize HQ in Stockholm, Sweden above.

Of course the prognostication on who will win the chemistry Nobel prize has been in full force this year as it is every year. We round up this year’s predictions from the usual suspects, with number crunchers at Thomson Reuters opting for organic light emitting diodes (that now seems a lot less likely given the physics Nobel prize – they surely wouldn’t award two Nobels to LEDs in the same year would they?), RAFT polymerisation (a technique to control the molecular weight of polymers) and mesoporous materials (industrially important catalysts). Others relying on gut feeling have picked out the lithium-ion battery and microfluidics. Check out the blog for the full list.

A late entry for the chemistry Nobel predictions that didn’t make our original list came in this morning from ChemBark aka Paul Bracher at Saint Louis University. He’s got a huge list of potential winners, and he gives the best odds to single-molecule spectroscopy and the application of lasers, naming Dick Zare and William Moerner at Stanford and Michel Orrit at Leiden Institute of Physics.

9.31am Living the Nobel life

Lookingfurtherbackthroughtime, the breadth of chemistry rewarded by the prize is clear – although some will argue that some of the research rewarded isn’t chemistry at all. But what about the winners? Does it change your life? Open doors or attract unwanted attention? We talked to a handful of winners to find out what living the Nobel life is like.

If you can’t remember who won last year’s chemistry Nobel, the prize went to Martin Karplus of Harvard University, Michael Levitt of Stanford University and Arieh Warshel of the University of Southern California. For a quick refresher check out our feature on how they took chemistry into cyberspace.

We’ll be liveblogging the chemistry Nobel prize all this morning. Keep updating the page for the latest news on the most prestigious prize in chemistry. The Nobel prize ceremony is set to start at 10.45am UK time.

Meanwhile, if you want to read about yesterday’s winners of the physics Nobel prize for the development of the blue LED check out our story. Over at Physics World one of the winners of the physics Nobel, Shuji Nakamura, penned an article for the magazine back in 1998 on his work developing the blue LED that is well worth a read. It covers the history of LEDs and why when red and green LEDs were first created back in the 1950s and 1960s it took another three decades for scientists to produce the first blue LED.