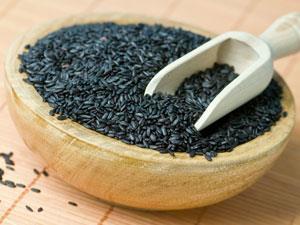 Antioxidants in black rice have prolonged the life of fruit flies by 14%, say scientists from China.

Antioxidants inhibit the effects of reactive oxygen species in the body, which attack cells and are responsible for ageing. Black rice, rich in antioxidants and widely consumed in China, is associated with a reduction in the risk of cancer, heart disease, diabetes and Alzheimer’s disease. It’s also been claimed to possess anti-ageing activity. Zhen-Yu Chen and colleagues from The Chinese University of Hong Kong fed antioxidants in black rice extract to fruit flies and observed that the flies lived longer than they normally would. Their mean lifespan increased from 44 days to 50 days.

The extract contained two anthocyanins – cyanidin-3-O-glucoside and petunidin-3-O-glucoside. The team fed different amounts of the extract to fruit flies. They found that 30mg/ml of the extract increased their lifespan. The anthocyanins increased the expression of antioxidant enzymes and a gene that suppresses progressive neurodegeneration. The compounds also decreased expression of the gene Methuselah, an action that has previously been shown to increase lifespan.

‘Black or purple coloured rice bran is a unique source of a high level of both water-soluble (anthocyanins) and fat-soluble (vitamin E) antioxidants,’ says Zhimin Xu, who discovered this while studying the bioavailability of antioxidants in coloured rice bran at Louisiana State University, US. ‘Both antioxidants may synergistically prevent cell inflammation, which usually initiates the development of many chronic diseases.’

However, Xu does add that ‘if the number of flies used in the experiment could be increased to 2000 for example [from groups of 200], I would expect that the researchers might get more significant difference in the survival rate and lifespan. But the research does display another example to confirm the health benefits of black rice bran’.