US scientists have demonstrated a way to sensitively track molecules in living cells without attaching bulky labels or staining a sample. The researchers say the approach will have widespread biomedical applications, including in monitoring drug delivery and imaging tumours. But it is also attracting interest from the manufacturers of beauty products keen to see how their products diffuse through skin.

Christian Freudiger, Wei Min and colleagues at Harvard University used a variant of Raman spectroscopy to focus in on fatty acids in human lung cancer cells, and to picture lipid distribution in mouse skin samples. They were able to map penetration of the acne drug retinoic acid through skin, and - by following lipid contrast - to make images of individual neurons in a mouse brain. 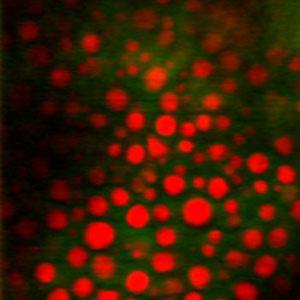 SRS image of adipocytes (red) in the layer of fat beneath mouse skin, surrounded by a compound called dimethyl sulfoxide (green) that was applied to the skin’s surface

The team’s technique, stimulated Raman scattering (SRS) microscopy, uses two low-intensity laser beams to scan a sample for a frequency of interest, such as one particular vibrational mode of a fatty acid. ’The application of conventional Raman microscopy to bioimaging is limited because to get high sensitivity you need high laser powers that often destroy samples,’ says co-author Sunney Xie. ’So we have something like Raman, but it’s orders of magnitude more sensitive.’

Xie’s technique can produce 3D images of a sample very rapidly, without labelling. Both beams converge on the sample, and are ’tuned’ by matching the difference between their frequencies to the vibrational frequency of the molecule of interest.

The approach is similar in principle to another form of Raman spectroscopy - coherent anti-Stokes Raman scattering (CARS) - that was until recently thought to hold potential for sensitive bioimaging. But, explains Don McNaughton, a molecular spectroscopy expert at Monash University in Australia, CARS only produces signals in a part of the spectrum that is of little interest. ’As Xie points out, the CARS spectrum is not a normal Raman spectrum and although it can give great contrast for imaging there is very little molecular information forthcoming,’ he says.

SRS, says McNaughton, seems to gets around the problems of CARS and conventional Raman. It uses lasers with much lower average power, in order to preserve the sample, and produces a more easily interpretable spectrum. In particular, it cuts down on the background signal that plagues ready interpretation of CARS.

The team are already working on several different applications, simultaneously using SRS to try to understand the metabolism of polyunsaturated fats and to map the distribution of various neurotransmitters in synapses. Xie says they are also collaborating with Harvard Medical School to develop a device for imaging tumours. ’This device will do a lot for medicine - our vision is that it will go into hospitals. And with the emergence of reliable fibre lasers, we will have a portable device,’ he says.

According to Xie though, it’s not the pharmaceutical companies but the cosmetics companies who are beating down a path to his door. ’Skin care product companies want to see their active ingredients,’ he says. ’They have different formulations and they want to see how they’re distributed and how fast they go into the skin.’

Whatever the application, McNaughton says the team have achieved a great step towards realising the potential that Raman has shown in providing a generally useful imaging tool. ’I have been waiting for such a paper,’ he says. ’Xie deserves hearty congratulations.’