Graphene sheets could be used to make speakers for sound systems

Korean scientists have used graphene sheets to make a transparent and lightweight loudspeaker which, they say, can be attached to windows and computer screens.

Graphene, whose isolation led to the Nobel prize in physics for Andre Geim and Konstantin Novoselov, is a single layer of graphite. Owing to its remarkable mechanical and electronic properties, it is set to revolutionise modern technology and new uses for it are continuously being discovered. However, one of the big challenges is to fabricate large area films of graphene.

Now, Jyongsik Jang and coworkers from Seoul National University have used inkjet printing and vapour deposition to deposit graphene oxide onto poly(vinylidene fluoride) (PVDF), which is then reduced to create a graphene film. This demonstrates not only a new method for making controlled graphene films, but also a new use for the material: for making a thin transparent loudspeaker.

The speaker system consists of a PVDF thin film sandwiched between two graphene electrodes. The speaker works because when an electrical current from the sound source is applied, the converse piezoelectric effect causes the PDVF film to distort, creating sound waves. 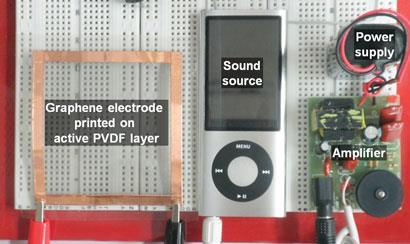 Such a system would be easy to install and usable anywhere where sound is needed, Jang explains. They could even eventually be used as noise cancelling devices by creating anti-noise waves (same amplitude but with inverted phase to the original sound).

Although similar speakers are already available commercially, using PEDOT:PSS electrodes, Jang’s new system demonstrates advantages over this existing technology in terms of cost and power consumption. ’Graphene is cheaper than other electrodes, such as metals and conducting polymers,’ he says, ’and the graphene-based acoustic actuator does not need expensive high power voltage amplifiers due to low power consumption.’

In addition to praising the authors’ device, Jinyue Jiang, an expert in optoelectronic materials at the University of Nebraska, US, is impressed by their new deposition technique. ’The beauty of this technique lies in its potential for large scale production and its ability to control the location of graphene - [depositing] graphene thin films on various substrates,’ he says.

However, Jang concedes that more work needs to be done to improve sound quality and reduce prices before commercialisation is possible. As such, they are now looking to improve bass response by modifying the PVDF film.