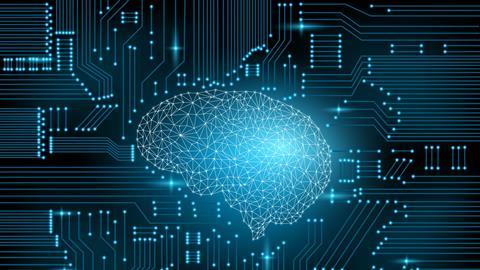 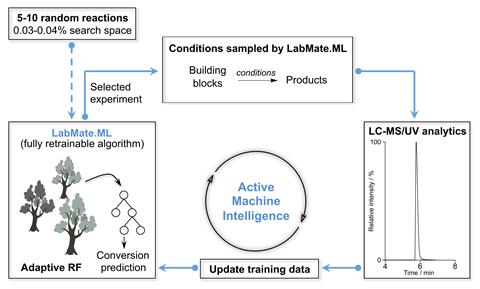 Workflow for reaction optimisation by LabMate.ML

A free software tool that can find the best conditions for organic synthesis reactions often does as well as expert chemists – somewhat to the surprise of the researchers.

The software, called LabMate.ML, suggests a random set of initial conditions – such as the temperature, the amount of solvent and the reaction time – for a specific reaction, with the aim of optimising its yield. After those initial reactions are carried out by a human chemist, their resulting yields are read with nuclear magnetic resonance and infrared spectroscopy, digitised into binary code and then fed back into the software. LabMate.ML then uses a machine-learning algorithm to make decisions about the yields, and then recommends further sets of conditions to try.

Researcher Tiago Rodrigues of the University of Lisbon says LabMate.ML usually takes between 10 and 20 iterations to find the greatest yield, while the number of initial reactions varies between five and 10, depending on how many conditions are being optimised.

‘In the beginning the models are not very good, but LabMate.ML starts suggesting which experiments we should perform next,’ he says. ‘As more data becomes available, the models start improving and the predictions start approaching what we get in the chemistry lab.’

Depending on the specific reaction, LabMate.ML can determine its optimum yield in a few days – much faster than a purely manual method, Rodrigues says.

In nine proof-of-concept studies – including an Ugi 3-component reaction used in drug discovery, a Buchwald-Hartwig cross-coupling reaction and a Horner–Wadsworth–Emmons olefination – LabMate.ML performed comparably to an expert panel of human chemists.

‘What was unexpected was how competitive our approach was relative to experts – some of them with 30 years of hands-on synthetic chemistry experience,’ Rodrigues says. ‘Our expectation was to perform just a little bit below [the experts] … most chemists are familiar with which conditions work best for a certain reaction.’

Instead, the researchers found that the software was exploring parameters typically neglected by chemists, and in some cases its success was due to the exploitation of those parameters, he says.

LabMate.ML is open source and runs on a desktop computer – the whole system requires only a single chemist and common laboratory equipment, which makes it much cheaper to operate than fully robotic systems, Rodrigues says. He thinks LabMate.ML will be an inexpensive approach to yield optimisation for labs that may not have access to what are – so far – relatively costly chemistry robots.

‘I don’t think chemistry robots with artificial intelligence will be democratised in the next 10 or 15 years,’ he says. ‘Unless there are some huge developments, I don’t think that the common laboratory will have access to this technology.’

That gives LabMate.ML a window of several years in which it can be useful, by freeing up human chemists to focus on other laboratory tasks, he says. ‘The goal was not to find a substitute for a chemist, but to develop a tool that could help chemists.’

The University of Glasgow’s Lee Cronin, who has led other research into chemistry robots and machine learning2, says the new software tool provides a bridge between purely manual labour by chemists and fully automated chemistry systems. By giving results that are comparable with human experts, ‘it prepares the user to go faster with robotic systems’, Cronin says. ‘From that point of view, it’s brilliant.’

Cronin doesn’t agree, however, that most labs will need to wait long for chemistry robots that can perform reaction optimisations. ‘I think it’s going to be here in two or three years, not 10 or 15,’ he says.