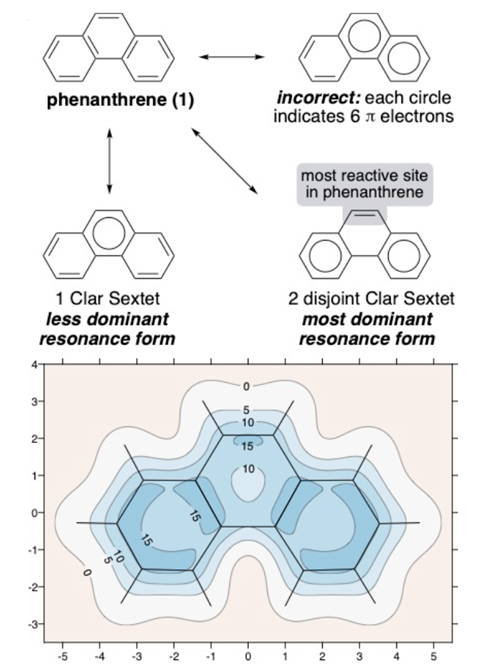 The magnetic shielding maps provide an intuitive way to understand aromaticity. In this case phenanthrene is shown and the darker blue indicates greater aromaticity, indicating that the terminal rings are more aromatic than the central one

A computational method that maps off-nucleus magnetic shielding gets to the heart of polycyclic molecules’ aromaticity. According to the researchers behind the work, the plots are an intuitive way to visualise Clar’s rule, which predicts a polycyclic hydrocarbon’s dominant resonance form.

Aromaticity is a fuzzy concept. The International Union of Pure and Applied Chemistry (Iupac) defines an aromatic molecule as one that has ‘a chemistry typified by benzene’ – a definition that is not particularly helpful when it comes to identifying aromaticity. Instead, chemists often use simple qualitative rules such as Hückel’s (4n + 2) rule. But in polycyclic aromatic hydrocarbons (PAH), it’s not sufficient to know whether the molecule is overall aromatic – the individual rings have varying degrees of aromatic character.

In the early 1970s, Erich Clar developed his sextet rule, which states that a molecule’s dominant resonance structure is the one with the largest number of disjointed aromatic π electron sextets. Clar sextets are depicted by a circle drawn inside a benzene hexagon.

Yet, there is still a lot of confusion around Clar’s rule. Even though each circle corresponds to six π electrons, ‘there are a lot of people who still draw anthracene with a circle in all three of the rings’, says Judy Wu who researches aromaticity and its applications at the University of Houston, US, and wasn’t involved in the study.

Peter Karadakov from the University of York, UK, and Brett VanVeller and Bryan Lampkin from Iowa State University, US, have developed a method to create isotropic magnetic shielding (IMS) plots, which provide an intuitive picture of aromaticity – both overall and local. ‘As soon as you see them, you can immediately start interpreting them, they look like drawing Clar sextets with different weights of the pencil,’ says VanVeller. They have now applied their IMS plots to PAHs for the first time.

In phenanthrene, for example, the terminal rings are darker in colour, so more aromatic, than the central ring – as is predicted by Clar’s rule. ‘We can replicate Clar’s [rule] when it is accurate, and we can go beyond it when it’s inaccurate,’ explains VanVeller. In the cases of coronene and linear acenes, molecule that contain migrating sextets, there’s no single static representation that encompasses their resonance forms. But the contour plots show immediately that all of coronene’s outer rings are equally aromatic, while in anthracene the central ring is the most aromatic one.

IMS is essentially the same magnetic shielding that influences chemical shift in nuclear magnetic resonance. But while NMR shifts are centred around an atom, IMS shows what’s happening between them. ‘It is a quantity that is showing the extent of electronic activity,’ explains Karadakov. ‘Of course, you will be expecting that electronic activity would be more intensive around chemical bonds – and this is in fact what creates this nice correspondence between our plots and the Clar sextets.’

‘The drawback is that to obtain all this information, we need to do a lot of computational work,’ says Karadakov. It takes two days to create the plot for dibenzozethrene, an eight-ring molecule with diradical character.

‘I thought it was very well put together to show that you can use this visualising tool to see the effects of aromaticity,’ says Wu. ‘But at the same time, there are various tools that when you use two or three of them together, you can get the information that you can get from IMS.’ Many chemists have been using ring current plots or nucleus-independent chemical shift to get an idea of overall and local aromaticity. Nevertheless, says Wu, the plots could provide a great educational tool if they found their way into textbooks to explain Clar’s sextets – and avoid future anthracene drawing disasters.

Karadakov, VanVeller and Lampkin are now working on a tutorial so other chemists can create their own aromaticity maps.