Oxamate salts add to the permanency of ‘set in stone’

Scientists in Italy have made a new oxamate salt that could help shield monuments from weathering.

‘Set in stone’ describes something permanent or difficult to change. However, in regions of polluted air, this begins to lose meaning. Sulfur and nitrogen oxides produce acid rain, which dissolves calcite in limestone and marble monuments, and leads to their degradation. 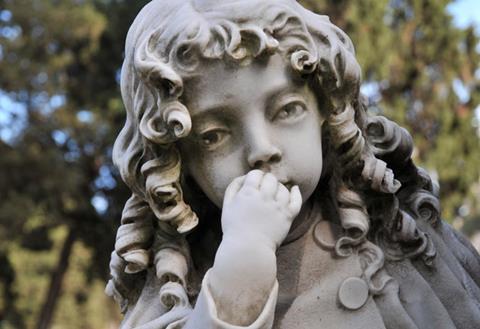 The treatment was tested on marble statues by Giuseppe Maria Sartorio in the Monumental Cemetery of Bonaria in Cagliari,

To tackle this problem, scientists lead by Massimiliano Arca at the University of Cagliari, have synthesised a promising protective agent for calcerous stone. Calcium carbonate reacts with oxamate ions to produce a calcium oxalate salt. To allow appreciable salt formation on marble and limestone surfaces, the team increased the oxamate ions’ solubility by adding a phenyl group and creating ammonium N-phenyloxamate. After immersion in the ionic solution, FT-NIR spectra and SEM microscopy uncovered an invisible, low solubility, crystalline calcium phenyloxamate coating. With no visible colour change and a thickness of up to 15µm, this salt is an ideal candidate to prevent weathering and retain the appearance of stone monuments.