Make some noise for smart fibres

Fibres made of multiple materials could function as communication transceivers, emitting an electrical response or sound when the fibres are put under stress or subject to acoustic waves of a range of frequencies, say researchers in the US.

Fibres have a broad range of applications ranging from textiles to complex fibre-optic communication devices. However, such fibres have been incapable of changing their properties after an external force is applied due mainly to the disordered structures of the glassy materials traditionally used to construct the fibres.

Yoel Fink and colleagues at Massachusetts Institute of Technology (MIT) have designed multi-material piezoelectric fibres - ordered fibres where mechanical stress can trigger an electrical voltage or potential - that could in the future form a mesh structure and be used as sensor materials. 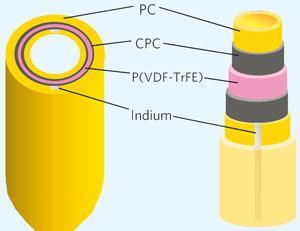 The structure of the fibre incorporates different materials in a shell arrangement. The first shell is comprised of a hollow crystalline polycarbonate (PC). Then a shell of carbon-loaded poly carbonate (CPC) is added. The CPC is a viscous and conductive compound that facilitates charge transport across the fibre whilst protecting the copolymer when the material is drawn out into long thin fibres. A shell of polyvinylindene fluoride copolymer [P(VDF-TrFE)] is then added to enhance the piezoelectric response before a further shell of CPC is added. Indium electrode filaments are added to deliver an electric field to the copolymer shell before the whole assembly is coated in a PC cladding.

The team tested the fibre by first using the indium electrodes to apply an electric field to the copolymer layer, poling the material to create the ordered piezoelectric domains. They then subjected the fibres to acoustic waves and found that they emit a sound in response to a variety of frequencies.

’The authors have demonstrated the ability of the fibres to detect vibrations underwater and for them to emit sound in the audible range, highlighting some significant applications in transceiver communications,’ says Stephen Wilson, an expert in piezoelectric devices at Cranfield University, UK. ’Owing to their flexibility it may be possible to incorporate these new devices into a range of wearable fabrics,’ he adds.

In addition, the ’piezoelectric fibre devices could form the basis for an active catheter capable of accurate pressure and flow measurements in very small blood vessels’ say Fink and colleagues.

Whilst Wilson believes that there is still some way to go before the fibres are at a stage where the potential applications can be realised, he believes ’the level of materials-engineering skill and accomplishment shown by the authors is truly outstanding’.