A portable device to measure levels of contaminant in infant foods

Scientists from Spain have used a lab on a chip device to quickly analyse levels of zearalenone, a contaminant, in infant foods with a detection limit below legislative requirements.

Alberto Escarpa and his team from Alcala University, in Madrid, have made a microfluidic device that can detect zearalenone levels to 0.4ug/l-1, well below the maximum legal amount of 20ug/kg-1.

Zearalenone is a metabolite from fungi found in cereal crops, such as maize, barley, oats, wheat and rice. It can be a risk to humans because it causes infertility and has been linked to cervical cancer. Current methods used to detect the compound involve two separate steps - an immunoassay followed by detection using techniques such as thin-layer chromatography or mass spectrometry.

Escarpa’s team designed a microdevice that combines the two stages in two separate chambers on a glass microchip. They injected a food sample into an immunological reaction chamber where zearalenone, in the sample, competes with an enzyme-bound zearalenone in the system to bind to antibodies attached to protein-coated magnetic beads. The beads were then guided towards an enzymatic reaction chamber using a magnet. Here, the enzymes catalyse an oxidation reaction. The response current produced is proportional to the enzymes’ activity and also to the amount of zearalenone in the sample. 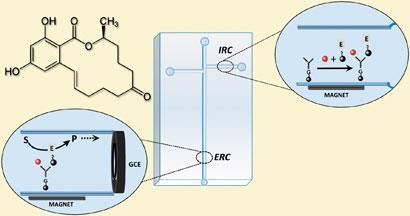 ’Such lab on a chip devices are important from the standpoint of saving time, money and expensive reagents and don’t need a skilled operator,’ says Escarpa. This highly sensitive and selective chip, he adds ’avoids the laborious and time-consuming procedures associated with conventional immunoassays’.

’This is useful for a problem that is otherwise quite expensive to solve. Usually, the food has to be taken away to be analysed, which takes a long time, but this device can do it in a few minutes,’ says Martin Pumera, an expert in electrochemistry and biological chemistry at Nanyang Technological University in Singapore. He adds that as the detector has been miniaturised, it could be integrated into a mobile phone sized device, increasing its applicability.

In the future, Escarpa hopes to automate the sampling and sample pretreatment steps too.