US-based researchers have developed the first one-step synthesis of a biofuel precursor from untreated agricultural waste. The work could pave the way to a simple and efficient method of biofuel production.

Biochemist Ron Raines and his team at the University of Wisconsin-Madison have directly converted untreated corn stover - the inedible leaves and stalks of the plant - straight into 5-hydroxymethyl-fufural (HMF); an ’unprecedented’ process, says Raines. This compound is a platform for many commodity chemicals, and for the promising potential fuel dimethylfuran (DMF). 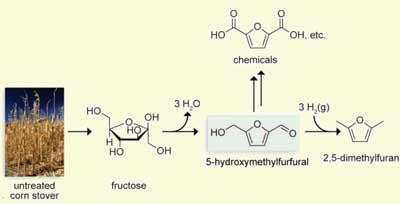 HMF can be turned into fuels or chemical feedstocks

Although DMF has yet to be widely adopted as a fuel, advocates argue it has far more potential than ethanol. ’It has the same energy content as gasoline - 40 per cent higher than ethanol,’ says Raines. ’It’s already been shown to be an effective fuel additive, and it could eventually replace gasoline, and be used with existing infrastructure.’

Since gasoline’s power as a fuel is its high carbon content, the aim when converting cellulose into fuel is to make it more carbon-rich. ’Cellulose is a polymer of glucose, and glucose is has a 1:1 ratio of carbons and oxygens,’ Raines explains. ’Combustion adds oxygen to the molecule, so we used some simple chemistry to strip away oxygens - to sort of "unburn" it.’

The one-step HMF production process uses N,N-dimethylacetamide (DMA) containing lithium chloride as a solvent, and a chromium catalyst. Once the cellulose is broken down into fructose, three hydroxyl groups are eliminated as water molecules, lowering the oxygen content to give HMF. In a second step, hydrogen gas can then be used to further reduce HMF into DMF.

Tied up in knots

In previous efforts to convert cellulose into useful products, ionic liquids have been used as very effective solvents. But, according to Raines, his team rediscovered a simpler approach - exploiting the ability of chloride ions to dissolve cellulose. ’Cellulose is a recalcitrant material - it ties itself in knots,’ says Raines. ’But the chloride ions break up interactions between the cellulose molecules.’ Using lithium chloride, with a small amount of ionic liquid to optimise the process, his team was able to obtain a yield of over 50 per cent.

Raines also believes that organic chemistry is a far more feasible approach to biofuel production than fermentation. Small molecular solvents are able to swim around the lignin cage that surrounds the cellulose in untreated plant waste. ’Microorganisms and enzymes can’t get access to it. And fermentation is a hugely expensive process - for fuel production you would need fermentation tanks the size of Iowa.’

Stephen del Cardayre is vice president of R&D at LS9, a US-based company that specialises in biofuels, and which plans to develop sustainable industrial chemicals. He points out that DMF still needs to be validated as a suitable fuel before it is widely adopted.

’But if there were an economic and scalable process to produce it, that validation would be pursued, [and this] work is definitely a significant step in that direction,’ he says. ’There is still plenty of work to do, but their results certainly suggest that work is worth pursuing.’