Less salt may not necessarily mean less flavour, according to new crisp research. It's all in the way the salt is released into the mouth

An investigation by UK scientists into how salt is released from crisps (known as potato chips in the US) as you eat them could lead to a healthier crisp that tastes just as good. 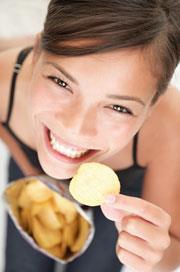 Salt from crisps is only released into the mouth 20 seconds after chewing begins, by which time, the crisp has been swallowed

Ian Fisk and Tian Xing from the University of Nottingham found that a large proportion of the salt in crisps is only released into the mouth 20 seconds after chewing, by which time the crisp may have already been swallowed. Fisk says that this salt burst is underexploited, but it could open doors to salt reduction in snack foods.

Excess salt in the diet has been linked to high blood pressure and cardiovascular disease, so reducing salt in processed foods is a goal for health authorities and food companies alike. ’Our current aim is to develop a series of technologies that accelerates the delivery of salt to the tongue by moving the "burst" from 20 seconds to within the time that you normally chew and swallow,’ says Fisk. Scientists could then increase the flavour using less salt.

’Given that people chew and swallow in different ways, it is important to control how they chew and swallow to allow us to understand salt release in the mouth,’ says Fisk. He and Xing asked a panel of food testers to chew a crisp a prescribed number of times and hold it in their mouths for 60 seconds. The team monitored the salt level in the mouth throughout the tests by taking tongue swabs and analysing them with flame photometry. After 20 seconds, they detected a peak in salivary salt level. The panellists confirmed that they too sensed a significant increase in salt at around this time.

Salt release is complicated because the salt sits on both the crisp’s surface and is embedded in the surface oil, says Fisk. The salt has to be physically separated from the crisp bolus (chewed material), solubilised in saliva and then moved to the salt receptors in the tongue for perception to occur, he explains.

’The work contributes to the fundamental understanding of the phenomena occurring during eating,’ says Serafim Bakalis, who investigates how to deliver low salt products without compromising their sensory attributes at the University of Birmingham, UK. ’It will aid in the development of healthier food products without compromising the sensory qualities.’

Fisk is to embark on a research project in March, working with a wide range of large and small food companies in the east midlands in the UK to help them develop effective salt reduction strategies and to solve technical problems surrounding salt reduction.