An array of molecular rotors mounted on a surface - resembling a microscopic wind farm - has been made by scientists in China. The research is a step towards integrating rotors into nanomachines that could function as power or propulsion systems. 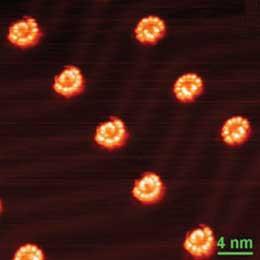 Molecular rotors on a gold surface

The nanomachinery toolbox already contains propeller-shaped molecules: four bladed tetra-tert  -butyl zinc phthalocyanine - (t-Bu)4-ZnPc. But trying to attach these molecules onto surfaces where they can spin freely has been difficult.

Now, chemists led by Hongjun Gao at the Chinese Academy of Sciences, Beijing, have found a way to attach thousands of rotors to a surface at the same time. Crucial to the process is a highly-polished gold surface, made of atoms arranged in a repeating ’herringbone’ pattern.

’The herringbone structure provides the surface with certain anchor points,’ explains Werner Hofer at the University of Liverpool, who collaborated on the project. Hofer notes that under very low temperatures, rotor molecules can self-assemble at these points on the apex of the V-shapes. ’But more importantly, the structure allows the rotors to attach slightly off-centre,’ he adds.

Each rotor has a zinc atom at its heart and this might be expected to be the site at which the rotor attaches to the surface. But instead, a nitrogen atom surrounding the metal core is favoured as the binding site - meaning that the metal core spins around the central axis as the blades turn.

’This is a cute piece of surface engineering at the nanoscale,’ says Geoff Thornton, head of the Nanoscience group at University College London. ’It is a proof-of-principle that molecular systems can be anchored onto a surface - so it is a good step forward.’

However, Thornton notes, the rotors are currently only stable at -196?C, the temperature of liquid nitrogen. ’The next step forward is to find a more robust assembly that might allow the system to be stable at room temperature,’ he says.