Researchers based in the US and Korea have developed a membrane that cuts the costs of filtering salt from seawater. The new polysulfone-based material is resistant to chlorine treatment - removing the need for some of desalination’s costly processing steps.

The most common desalination process, reverse osmosis, forces seawater through semi-permeable membranes to filter out salt. Though a lot of power is needed to run large-scale desalination plants, they do boost supplies of freshwater - and globally, more than 1 billion people do not have access to safe and clean water.

One shortcoming of desalination membranes is that over time they can become blocked by the growth of algae or bacterial biofilms. Adding chlorine kills microorganisms in water - but also destroys polyamide-based membranes. So chlorine is usually removed from the water before it passes through the membrane and then re-added afterwards. 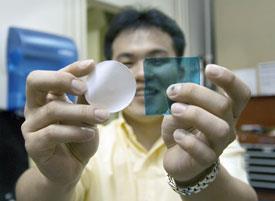 The new membrane, based on a polysulfone backbone, promises to make that cumbersome and costly process unnecessary. ’Polysulfone has better chlorine resistance than polyamides because its main chain consists of aromatic rings and strong carbon, sulphur and oxygen bonds,’ explains Ho Bum Park, who led one team at the University of Ulsan, South Korea. ’Therefore it does not contain the amide linkages that are sensitive to attack by aqueous chlorine.’

Polysulfones have been used before for desalination, but water doesn’t flow through them very well. This was remedied by changing how the polymers were made, says Benny Freeman, who led the other team at the University of Texas at Austin. ’Before, extra hydrophilic sulfone groups were added to the polymer after polymerisation - which put them in the least stable sites. Instead, we integrated these groups into the monomer, so when polymerisation occurs they are built directly into the structure.’

The new polymer has been patented by the team and Freeman expects that it will start finding commercial uses within three years.

But a lot more work is needed if membrane-based desalination is to solve global water shortages. Thanks to the power required to push water against the concentration gradient in reverse osmosis, running large-scale membrane-based desalination plants is too expensive for many developing countries. (Most existing desalination plants are built next to coastal power plants, taking advantage of excess energy and waste heat). For richer countries too, the benefits of desalination have to be weighed up against the emissions of fossil fuels the energy-hungry, inefficient process creates.

Improving membrane efficiency is key to reducing desalination costs and fossil fuel impact, says Thomas Mayer, who works at the Sandia National Laboratories in Albuquerque, US. Mayer’s team plan to achieve this by mimicking processes used by natural systems. ’The human kidneys for example, use membranes that can filter salt around 100 times more efficiently than synthetic membranes,’ he says. ’If we can replicate this, it would be very effective.’

If the membrane efficiency gets good enough, desalination membranes might even be integrated into human-powered filtration systems, such as the ’LifeStraw’ developed by Vestergaard Frandsen. This simple device contains a membrane that filters microorganisms from water and works on the power of human suction - though a spokesman for the company told Chemistry World there were no plans to develop a desalination straw in the immediate future.

Currently, reverse osmosis systems are the most effective ways of performing desalination on a large scale, but improvements are also being made in the efficiency of other technologies, such as thermal distillation or evaporation processes, Dow’s Lomax adds, so membrane processes have competition.