Two studies could spell disaster for malaria management, with the first evidence of a malarial strain resistant to a first-line drug, and signs that a widely used insect repellent could be neurotoxic.

Researchers in Cambodia have found the first indications that a strain of malaria has become resistant to artemisinin, the primary drug treatment in many countries.1 Experts have suggested that this resistant strain is likely to spread - and could pose a serious threat to millions of vulnerable people in Asia and sub-Saharan Africa.

The study was carried out in the city of Pailin, western Cambodia, where the malaria-causing Plasmodium falciparum parasite was found to be far less susceptible to artemisinin treatment than usual. Artemisinin is currently the ’gold standard’ of malaria medication, and great efforts have been made to establish use of the drug in developing countries. 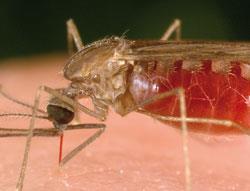 The researchers, based in Thailand and led by Nicholas White, say that containment measures are urgently needed, but it is probably too late to prevent the strain from spreading outside Cambodia.

’This is the first warning of disaster,’ says Peter Winstanley, a clinical pharmacologist at the University of Liverpool. ’We know that previous malarial drug resistances, such as to chloroquine and sulfadoxine-pyrimethamine, have come out of this same area in the past and caused havoc.’

But Winstanley notes that Asia is not where the strain is likely to cause the most harm. ’The place that we need to worry about is Africa. Artemisinin is an uncomplicated drug - it can be given orally and is relatively cheap. There aren’t many alternatives in poor regions like Tanzania and not much in the pipeline.’

Brian Greenwood, a malaria expert at the London School of Hygiene and Tropical Medicine agrees that the news is troubling. ’Threats like this are extremely difficult to contain, so it is only a matter of time before it reaches Africa,’ he told Chemistry World. ’Unlike swine flu, however, this will spread more slowly, so it could be ten years before we start seeing real problems.’

Adding to the trouble, another warning was raised this week after European biochemists found that DEET (N,N-diethyl-meta-toluamide), the most widely-used insect repellent, can act as a neurotoxin in insects and mammals.2 The researchers say that questions need to be asked about the safety of the popular spray-on chemical, developed around fifty years ago and now used by more than 200 million people a year.

The findings indicate that DEET acts in the same way as nerve gas - inhibiting the action of acetylcholinesterase, an enzyme needed to break down and recycle an important neurotransmitter called acetylcholine. But Greenwood downplayed the findings, noting that many clinical studies have been performed on DEET over the years.

’One can never be completely sure about safety - but DEET has been used very widely and for a long time,’ he says. ’Also, most users are only exposed to small amounts, so we can be confident that the majority of people will suffer no side-effects.’