As demand for computers, iPads and mobile phones sky rockets in India, driven by a buoyant economy and increasing affluence, thousands of tonnes of electronic waste is being created each year. In a bid to tackle this problem the government has enacted legislation that will systematise e-waste recycling and require manufacturers to reduce levels of hazardous chemicals in electronics. And the cost of meeting these new obligations is set to fall on electronics manufacturers.

India produces almost 400,000 tonnes of e-waste each year, according to an assessment conducted by the Manufacturers’ Association of Information Technology (MAIT), an Indian hardware trade organisation. But the larger issue at hand is that only 5 per cent of the country’s e-waste is recycled, while at least 40 per cent of obsolete and unused computers and electronic products languish in homes and warehouses. 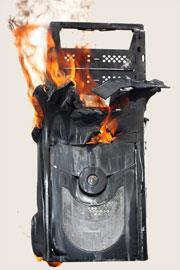 After several years of campaigning by environmental groups, India’s Ministry of Environment and Forests (MoEF) has introduced E-waste (Management and Handling) Rules 2010, which will come into effect in May 2012. These measures include Extended Producers’ Responsibility (EPR) for recycling, reducing levels of hazardous substances in electronics and setting up collection centres.

The new rules will cover discarded IT and telecoms equipment and consumer electrical goods. However, medical devices, light bulbs, fluorescent tubes and batteries are excluded. The legislation will also restrict the use of toxic substances like cadmium, mercury, lead, hexavalent chromium, polybrominated biphenyls and polybrominated biphenyl ethers in the manufacture of electronics. Environmental groups are calling for the government to go further and ban polyvinyl chloride (PVC) and brominated flame retardants (BFR) in electronics.

Manufacturers have been given up to three years to start introducing greener products that exclude or reduce levels of these toxic substances and will have to ensure that consumers are aware of the hazardous compounds present in their products. They will also have to provide information on the proper disposal of e-waste.

Abhishek Pratap, senior campaigner, Greenpeace India, says that the amount of e-waste India generates may be much higher as the MAIT study excludes electronic and electrical goods such as televisions, refrigerators and DVD players. According to Greenpeace India, the country generated 800,000 tonnes of e-waste in 2008 and this is predicted to double by 2012.

This is the first time in India that laws have followed the concept of an EPR or ’the polluter pays’. In future, manufacturers will be responsible for the safe disposal of electronic and electrical goods that they produce. They will be required to set up e-waste collection centres or introduce ’take back’ schemes. Bulk users, such as large corporations, will need to keep a record of their e-waste disposal.

’We welcome the new guidelines on e-waste management and recycling but the rules have been extremely diluted from what was expected from the government,’ says B K Soni, an e-waste recycler in Mumbai. Soni is the chairman and founder of Eco Recycling, a technologically sophisticated recycler, and was a member of the expert panel that helped the government draft its e-waste regulations.

The new legislation does not make any mention of informal recyclers, which currently collect around 90 per cent of India’s e-waste. The informal sector tends to recycle or extract metals using rudimentary techniques, such as burning or shredding e-waste, which poses a health hazard to employees. Several thousand people are estimated to be employed by the informal sector.

Ravi Aggarwal, director of the non-profit Toxic Link, which has been campaigning for the introduction of rule to govern e-waste, notes that the guidelines are silent on how to integrate the informal sector into the proposed e-waste disposal system. Moreover, the livelihoods of people in the informal sector are likely to be threatened by organised competition and the legislation provides no help to prepare the informal sector for the changes ahead.

Environmental groups also complain that the rules fail to prevent other countries dumping their e-waste on India, or India exporting its own e-waste problem. Currently, e-waste is illegally imported due to loopholes in the country’s export-import policies. For example, a large number of computers are brought into the country on the pretext of charity. India’s Directorate General of Foreign Trade estimates that illegal imports of e-waste are around 50,000 tonnes annually.

Post May 2012, the biggest challenge will be implementing the guidelines, as India has a poor track record of enacting environment laws. B R Balagangadhar, chief scientific officer at the Karnataka State Pollution Control Board in south Indian says: ’Implementation will be the key to the success of these rules. Collection of e-waste will be a big challenge. The rules don’t talk about coordinating with local agencies such as city municipalities, which have specific garbage collection points.’

Another glaring shortcoming is that the legislation contains no penalties for producers or recyclers for violations of the law. Environmental groups, recyclers and even the regulatory agencies are pragmatic and feel that the roll-out of the regulations is going to take its time. Soni points out India introduced rules on recycling lead batteries in 2001 and, to date, only 25 per cent of batteries are recovered.