Mars meteorite gets a boost of youth

A Martian meteorite that has played a pivotal role in our understanding of the Solar System has been found to be half a billion years younger than previously thought, say US researchers. Despite the age adjustment, the meteorite, called ALH84001, is still the oldest Martian rock found on Earth.

Much of our information about the geology of Mars comes from debris that was thrown into space by asteroid strikes on the red planet. Some of this material is still falling to Earth as meteorites - ALH84001 was found in Allan Hills, Antarctica in 1984.

The new age of the meteorite gives important insights into the volcanic processes at work on Mars, and may help refine models for the early formation of planets, including the Earth. The research also indicates that ALH84001 formed at a time when Mars was ’wet’ and had a stable magnetic field, conditions that would have favoured the development of simple life.

By calculating the ratios of long-lived isotopes of samarium and neodymium, the meteorite was determined to have formed 4.5 billion years ago. But now, Thomas Lapen at the University of Houston and colleagues at Nasa in Houston, US, have used an alternative radiometric dating process that measures lutetium and hafnium. 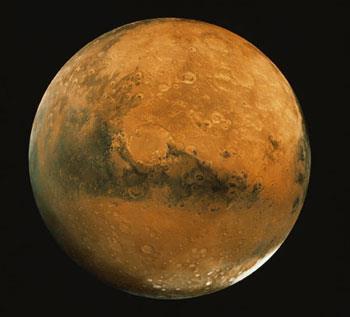 ’ We found that most of the samarium and neodymium in the rock resides in phosphate minerals, whereas lutetium and hafnium reside in other minerals,’ Lapen told Chemistry World. ’This is extremely important because phosphate minerals are relatively reactive and can be easily altered by acidic solutions or shock. ’

Since the lutetium-hafnium dating is determined from minerals that are more resistant to weathering, Lapen’s team believe that the technique more accurately reflects the true birth date of the rock. The data puts ALH84001 at 4.09 billion years old - meaning that it would not have been part of a primordial crust, instead it would have formed after a period of intense volcanic activity.

ALH84001 made headlines in 1996, when scientists observed biomorphs - unusual shapes resembling fossilized bacteria - under the microscope. Although Lapen’s findings support the idea that Mars could have harboured life by showing minerals that would have formed under aqueous conditions and in the presence of a magnetic field, there is still a difficult question to answer.

’Mars is certainly a good target for finding life beyond Earth,’ says Andrew Coates, head of planetary science at University College London. ’And the new date of 4.09 billion years brings ALH84001 more in line with when life first began to develop on Earth. This rock formed at a time when the Martian magnetic field was dying out, which has interesting implications for the history of the Martian atmosphere as well as planetary crust formation processes.’