A flexible strain sensor to detect damage to buildings during earthquakes

Guojia Fang and co-workers from Wuhan University made a sensor out of polymer nanofibres - poly(3,4-ethylenedioxythiophene):poly(styrenesulfonate) (PEDOT:PSS) and polyvinyl alcohol (PVA). They used electrospinning to draw out fibres from a mixture of the polymers, then formed a structure of interconnecting strands.

By attaching this sensor to one of the team’s fingers, they were able to test how it reacts to small movements. They found that the nanofibres conduct electricity in different ways depending on the strain placed on the material as the finger bends - the more stressed it is, the less current it conducts.

’During stress, the films elongate and the fibres straighten, so electrical contact between fibres becomes less effective. As a result, the resistance between the electrodes increases,’ explains Stephan Kirchmeyer, an expert in conductive polymers at Heraeus Precious Metals, Germany. This lowers the current across the sensor, which can be measured and used to monitor the extent of the strain. 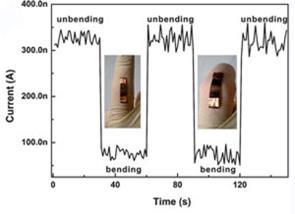 Most strain sensors are made of inorganic material encapsulated in a polymer.  The polymer improves the device’s flexibility, but the inorganic component prevents the device achieving the desired flexibility. Strain sensors made entirely from polymers can fit into smaller spaces because of their greater flexibility. Fan’s work is ’a new approach using PEDOT:PSS in the form of fibres to produce a functioning working mechanical sensor with suitable properties,’ says Kirchmeyer.

Fan’s team plans to improve the polymer nanofibres’ conductivity. They hope to make a free-standing PEDOT:PSS/PVA mat for use in applications such as touchscreens.