Dye probes give a colour readout of oxygen distribution in cells

Scientists in Germany have developed a strategy to visualise oxygen concentrations in cells to better understand its role in biological reactions such as metabolism.

Hans Gorris from the University of Regensburg and colleagues have embedded two luminescent dyes within polystyrene particles, which were taken up by cells. One is a red light-emitting indicator dye that alters its luminescence depending on the oxygen concentration; the second is a green light-emitting dye that acts as a reference and is not sensitive to oxygen. The colours enabled the dyes to be monitored on the green and red channels in a red-green-blue (RGB) digital camera, together with a fluorescence microscope. 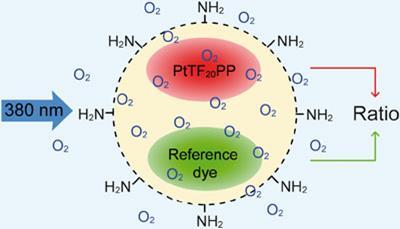 The team applied a technique called endocytosis to get the particles into rat kidney cells to measure the oxygen levels, which involves cells gradually engulfing the particles. They then followed the progress of the dye-loaded particles - or PEBBLEs (probes encapsulated by biologically localised embedding). In the oxygen saturated culture medium around the cells, the PEBBLEs were green. As they entered the cells over the next 48 hours, they turned red as the oxygen concentration decreased. As the PEBBLEs respond within seconds to changing oxygen concentrations, quick changes in the cells can be monitored.

’For ratiometric fluorescence imaging, the possibility to record multiple wavelength signals simultaneously is important because real time observation of fast dynamic processes is only possible in this way,’ says Daniel Citterio, an expert on optical chemical sensors from Keio University, Japan. He adds that the approach could be used to image other biologically relevant molecules, by replacing the oxygen-sensitive dye with fluorophores that are selective for different species.

’We predict that our research will shed new light on the role of oxygen in cell metabolism, respiration and cancer progression,’ says Gorris. He says that their future work involves expanding the platform to include ’other highly important intracellular species and parameters such as Na+, K+, Ca2+, pH and temperature for which sensitive probes are available.’