Meat mummies a feast fit for a Pharaoh 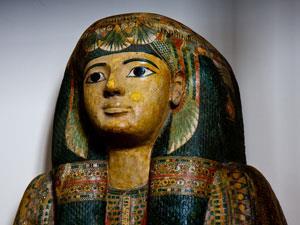 Mummified ancient Egyptians weren't just buried with their treasures, mummified food was provided for the afterlife

Egyptian Pharaohs liked to snack on spare ribs on their journey to the afterlife, especially those glazed in oil from a relative of the pistachio tree. That’s the finding of scientists in the UK and Egypt who’ve discovered that foods buried with high status Pharaohs were treated with a rare balm when they were mummified. The exotic Pistacia balm shows that food mummies were a high status item for ancient Egyptian burials, with the richest members of society plumping for only the best.

The ancient Egyptians mummified their dead in order to preserve the body, so that the soul had a place to go after death. Mummified meats were included with the burial goods to provide food for the afterlife. Previously, little was known about the preparation of these meat mummies, including whether they were prepared using the same balms as human mummies.

Now, Richard Evershed and Katherine Clark from the University of Bristol and Salima Ikram from the American University in Cairo have discovered that a precious Pistacia resin was used to embalm a beef rib that was placed in an Egyptian tomb over 3300 years ago. This pre-dates any previous use of the Pistacia resin with a human mummy by around 600 years. This pistachio resin is extremely rare, Evershed explains. ‘There is only one report of this resin in a human mummy, which dates back to the 7th century BC. This [paper] is the earliest report we have of this resin associated with any sort of Egyptian mummy.’

Samples from the mummy’s bandaging were analysed using gas chromatography–mass spectroscopy to determine the composition of the balm. The triterpenoids oleanonic and isomasticadienoic acid, and their oxidation products distinguished the Pistacia resin from the more commonly seen balm: coniferous resin. Evershed explains that ‘coniferous resin is based on diterpenoid components … it’s sort of all the abietic acid derivatives. [The Pistacia resin] is completely different – the pentacyclic triterpenoids are very distinctive.’

Co-author Ikram, a leading expert on animal mummies, explains that meat mummies would be prepared the same way as if they were being cooked, but then desiccated, coated in balms and wrapped in linen bandages. ‘There might also be some herbs and spices used but so far we haven’t been able to detect or isolate those.’ Evershed adds that balms were used for preservation: ‘We imagine that they used them to hold back microbial degradation; that’s what these resins are produced by plants for – for protection.’ 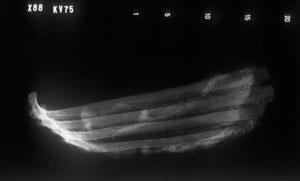 An x-ray of the 3300 year old mummified beef rib

The mummied beef rib was discovered in the tomb of the wealthy parents of Queen Tiye, the wife of Pharaoh Amenhotep III. Ikram points out it is therefore possible the tomb belonged to Tutankhamen’s step grandparents. ‘You don’t generally get this kind of resin unless you’re quite wealthy,’ she says.

‘This resin hasn’t been found in mummies very widely,’ confirms Evershed, ‘but it’s probably something to do with the status of these particular mummies. High status mummies have not really been looked at … It may well be that these were mummified with more exotic ingredients than we know from the lower status mummies.’

Andrew Chamberlain, professor of bioarchaeology at the University of Manchester, UK, says the finding ‘illustrates the extraordinarily sophisticated methods involved in furnishing the tombs of high-status individuals in ancient Egypt. An important contribution to our knowledge of ancient mummification methods comes from advanced chemical analysis of the ingredients incorporated into organic balms.’

Ancient Egyptian chemical analysis expert Stephen Buckley, from the University of York, UK, welcomes the results but says that there is still much to learn. ‘Understanding of Egyptian mummification remains very poor. We can expect our understanding of animal mummification alone to change substantially in the coming years.’

The team now plans to investigate higher status Egyptian mummies, providing they can get their hands on samples. ‘[For this research] we got hold of what mummies we could – there’s a couple from Cairo and the British Museum. The basic problem is that the Egyptians almost don’t allow any sampling,’ says Evershed.