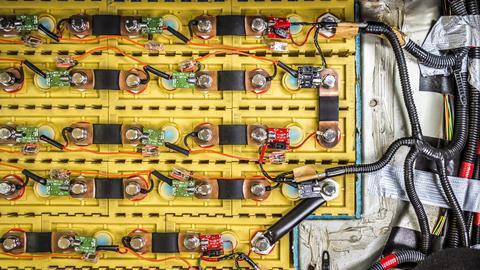 Researchers in China have developed a mechanochemical method for extracting lithium from spent LiFePO4 batteries.1 Their process generates Li3PO4, which can be re-sold at a profit to battery manufacturers, alongside two other chemical products, so could effectively provide users with a cash incentive for recycling such batteries.

Lithium iron phosphate batteries are widely used in electric vehicles. A 2021 study demonstrated their advantages over nickel- and cobalt-based alternatives for extending the range of electric vehicles via thermal modulation.2 However, methods for recycling lithium-based batteries remain limited and have various drawbacks in terms of green chemistry, explains Kang Liu from Tsinghua University. ‘For example, pyrometallurgy may require a high reaction temperature, and involves high energy consumption and flue gas release. Hydrometallurgy requires acid–base reagents and may produce wastewater containing heavy metals. And research into biometallurgy is still in the scientific research stage.’

Keen to reduce the use of acid and alkali in battery recycling, Liu and his colleagues have explored an alternative method. First they discharged spent LiFePO4 batteries in a saturated NaCl solution to avoid them combusting whilst they manually separated the cathode, anode and plastic separator. Next, they crushed the cathode so any aluminium foil could then be separated using a mesh screen. The team then used mechanochemistry to treat the remaining cathode material powder (C/LiFePO4) with a solid-phase oxidant co-grinding agent, sodium persulfate (Na2S2O8).

Further steps involved water leaching and vacuum filtration to remove the first product, FePO4, followed by chemical precipitation using Na3PO4 to remove the lithium ions in solution in the form of Li3PO4. Finally, the remaining Na2SO4 in the solution was precipitated and removed via evaporation and crystallisation. By recovering each chemical product, the resulting wastewater could then be recycled, and the fast rate of mechanochemical oxidation kept the mechanochemical processing step to below five minutes.

Liu says that, despite the simplicity and advantages of using mechanochemistry, the project was not without its challenges. ‘I think dissembling the lithium-ion batteries was the most difficult part of the project, because the electrolyte and organic solvent will volatilise during the recycling process under laboratory conditions. If this is not carried out in a fume hood, it may cause harm to the operator.’

‘As the popularity of lithium-ion battery increases, it has become clear that we need alternatives to obtain sufficient raw materials in an efficient manner and with minimum exploitation of our natural resources,’ comments Rodrigo Serna-Guerrero, an expert in mineral processing and recycling at Aalto University in Finland. ‘By using mechanochemical oxidation, the use of potentially hazardous leaching media for the extraction of lithium can reportedly be avoided. This work shows a positive step forward in the search of alternative sources of raw materials with low environmental impact and sheds light on the need of innovative ideas to improve recycling technologies.’

‘At present, the driving force for the recycling of waste lithium batteries is the economic profit it generates,’ says Liu. The team performed an economic analysis to understand how profitable their process could be. ‘The lithium products usually obtained by lithium recovery methods are lithium carbonate and lithium phosphate. Compared with lithium carbonate, the market price of lithium phosphate is relatively high.’ However, Liu cautions that when applying the technique in real life, ‘equipment, manpower and space will all be very restrictive factors’. Mechanochemistry has previously been explored in recycling other batteries, such as lithium cobalt-based materials,3 so the team plan to continue developing their methodology to increase profit margins.