In Tenerife in 1977, 583 people died in a fireball that erupted as one Boeing 747 tried to take off while another was on the runway. The collision would have been survivable, says Julia Kornfield from California Institute of Technology in Pasadena, but for a killer mist of burning aviation fuel. Now, Kornfield’s team hopes to minimise damage from such tragedies using self-assembling ‘megasupramolecule’ additives that ensure that fuel mists burn cooler and for less time. They might even have helped in the 11 September World Trade Center attacks – the only aviation disaster worse than Tenerife. Megasupramolecules might have mitigated the initial explosion that blew out windows and allowed a fire hot enough to soften steel, Kornfield speculates.

After Tenerife, scientists developed ‘antimisting kerosene’ by adding long-chain polymer molecules to absorb energy from the collision, stopping fuel droplets breaking up into a fine mist. Larger drops release energy more slowly, leading to relatively cool, short-lived fires. However, the FM-9 polymer added broke down as it was pumped, progressively reducing its effectiveness. And after a 1984 test where the press broadcast footage of an aircraft engulfed in flames, the idea’s popularity dwindled.

Kornfield was still interested in the concept though, but the problem of polymer breakdown still had to be overcome. ‘The eureka moment came in 2006,’ she explains, ‘when Ameri David, my graduate student, used a theoretical model to design molecules that dynamically link to form ultra-long polymers.’ Unlike covalent polymer bonds that break permanently under pumping conditions, supramolecules, which link smaller segments via non-covalent interactions such as hydrogen bonds, could later reform. And on their own the smaller molecules could survive repeated pumping and allow fuel to pass easily through filters. 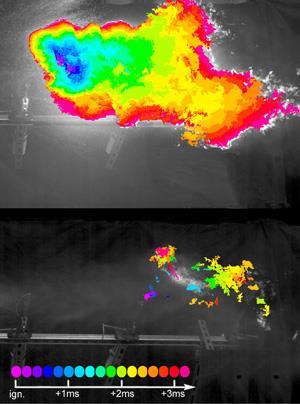 The name ‘megasupramolecules’ indicates the challenge the researchers faced in forming linear supramolecular chains as long as FM-9. Short individual building block molecules would usually rather form small rings, but David’s modelling indicated longer hydrocarbon segments would favour large supramolecules. But to avoid damage by pumping segments couldn’t be too long, and also had to be especially tough. To get segments to associate in long lines also required unusually ‘sticky’ linkages. Another of Kornfield’s students, Ming-Hsin Wei, identified that charge-assisted hydrogen bonds between amines and carboxylic acids, which are typically three times stronger than ordinary hydrogen bonds, were sticky enough.

In tests, the researchers fired a projectile at 140 miles per hour at a fuel container and placed three lit propane torches in the resulting mist’s path. The megasupramolecule fuel controlled misting both before and after being subjected to pumping forces.

Mark MacLachlan, a supramolecular chemist at the University of British Columbia in Vancouver, Canada, calls the study ‘a beautiful confluence of theory and synthesis to address an important real-world problem’. ‘The authors have taken advantage of a simple supramolecular chemistry concept and demonstrated that this is superior to existing solutions,’ he says.

Although Kornfield’s team estimate that megasupramolecules could save 500–1000 lives a year in ground-based aeroplane explosions, they’re also looking at other uses, including automobile fuel. Additionally, the researchers got backing from the US Army Tank Automotive Research Development and Engineering Center (TARDEC) in 2011 to try to use their work to cut deaths from improvised explosive devices (IEDs) in Afghanistan. ‘Our hope is that [megasupramolecules] will reduce fatalities and severe burns that result from IED attacks and other terrorist acts that deliberately involve post-impact fuel explosions,’ Kornfield says.

While the tests published in this paper only involved a single barrel of fuel, Wei is progressing well with scale-up, partially funded by chemical giant Dow, Kornfield adds. ‘It looks like it will be in a condition to be produced on a scale of kilos per day in less than a year,’ she says. Kornfield estimates that including the new additives will add $0.06 per gallon (£0.01 per litre) to the price of fuel. She hopes for approval to use them in diesel for road vehicles within two years, though for jet fuel approval can take five to seven years.