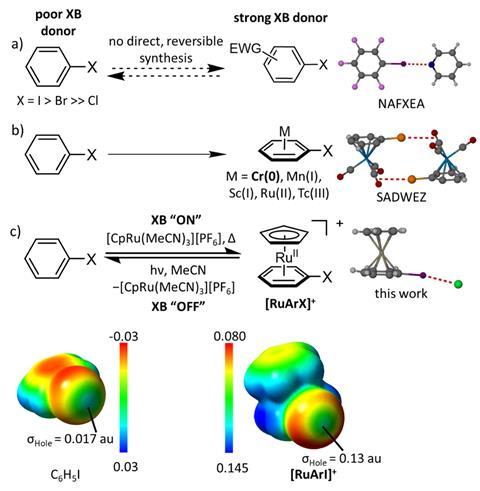 Similar to hydrogen bonds, halogen bonds are non-covalent interactions. They form between a covalently-bonded halogen atom’s electrophilic region – the σ-hole – and a nucleophilic region in another (or the same) molecule. Halogens with a bigger σ-hole potential are better halogen-bond donors.

Two chemists have now discovered that they can switch on iodobenzene’s halogen bond donor functionality by coordinating the aromatic ring to ruthenium in a sandwich complex. This type of switching has only ever been accomplished by modifying the donor.

To switch iodobenzene’s σ-hole on, it is combined with a cyclopentadienyl ruthenium at room temperature in acetone. The two compounds react to produce a sandwich complex, which increases the iodine atom’s σ-hole potential by a factor of eight. The reverse, off-switch reaction is flicked by removing the ruthenium using violet light.

The metalation mechanism allows chemists to further activate already strong halogen bond donors. It could also be used for systems in which intermolecular aggregation is switched on or off by heat or light.