US scientists have cracked a long-standing mystery surrounding an enzyme which oxidises methane to methanol. The finding could lead to a cost-effective and environmentally clean method of methanol production for fuel and feedstock.

Certain bacteria use methane monooxygenases (MMOs) to selectively oxidise methane at ambient temperatures, unlike modern industrial methods which require high temperatures, are inefficient and produce waste. However, controversy has surrounded the nature of the enzyme’s active site, preventing deeper understanding of how the enzyme works. It was known that either copper or iron is involved in the process, but which metal and how the atoms are arranged has remained a mystery.

Now, a team led by Amy Rosenzweig at Northwestern University in Illinois and Timothy Stemmler of Wayne State University in Michigan has answered these key questions. 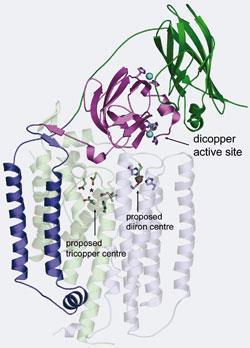 The researchers treated isolated enzyme extracts with cyanide which removed all metal activity. They then selectively added back either copper or iron. When copper was added, activity returned, which was not the case with iron. ’So that answered the question of whether it was copper or iron,’ says Rosenzweig. Quantitative analysis of the amount of copper needed to restore activity showed that only two atoms of copper per active site were required - previously it was thought that copper was present in groups of three.

The location of the active site was also controversial. While part of the enzyme is associated with the membrane, another part is soluble, lying within the cell’s periplasm. Previously it had been thought that the metal active site was in the membrane-bound fraction. The researchers genetically engineered E. coli bacteria to synthesise only the soluble portion of the enzyme, which showed activity. This demonstrated that the active site lies in the soluble part of the protein.

’We can now begin to study the mechanism of the reaction,’ says Rosenzweig. ’People have been trying to make small molecule catalysts to do this selective oxidation of methane but not very successfully.’ Another approach may now be to make a small protein catalyst says Rosenzweig, with these findings taking research a step closer to this goal.

Tom Smith, who researches MMOs at Sheffield Hallam University in the UK, says that the new research ’provides interesting new data strongly supporting a binuclear copper cluster as the principal active centre of the enzyme’. Smith adds that it is ’highly significant’ that the team obtained methane-oxidising activity in a recombinant soluble domain of the enzyme expressed in E. coli, which ’may open the way to development of commercially viable small-molecule mimics of MMO’.