South Korean researchers have developed a way to efficiently assemble microstructures from plastic parts - by sculpting them to fit to rails which then guide the parts along fluid-filled channels.

Such ’railed microfluidics’ could be used to make two-dimensional patterns of living cells (embedded in polymers) for tissue engineering, suggest Sunhoon Kwon and colleagues from Seoul National University, South Korea. As examples of the technique, they created two-dimensional models of the Eiffel Tower, a Greek temple, and a computer keyboard - all made up of micron-sized plastic parts. 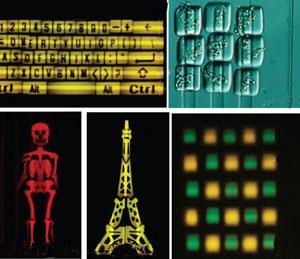 The technique is a compromise between robotic pick ’n’ place assembly - too costly and error-strewn at micrometre scales - and getting complementary parts to self-assemble in microfluidic channels, which requires a wasteful excess of starting material.

By pumping liquid along each channel, and under the guiding influence of a number of rails, various polymer shapes can be transported in a defined sequence to specific locations in order to build up any required structure. Once the parts reach their pre-determined positions, they can be fused together with ultraviolet light.

’This method adds flexibility to fluidic assembly,’ says Henry Hess, who works on nanoscale motors at the University of Florida. ’It seems too early to tell what exactly the killer application is, but it is an interesting tool to have.’