A cheap and portable device to detect cholera has been made by Italian researchers that could help significantly reduce the number of cholera related deaths.

Cholera is a serious water-borne infection that can be fatal. A recent outbreak in Haiti has killed over 600 people and, globally, the disease claims more than 100,000 lives annually. Current detection technologies, such as enzyme-linked immunosorbent assay screening - a biochemical technique used to detect the presence of an antibody in a sample - are sensitive, but expensive and time consuming.

Giuseppe Maruccio and researchers at the University of Salento and the Institute of Nanoscience in Lecce have devised a new microfluidic chip that they say is both quick and economical. 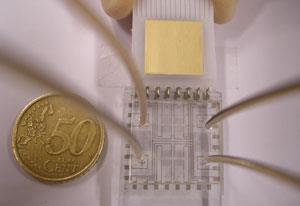 The team immobilised anti-cholera antibodies onto gold electrodes and integrated them into microfluidic chips that were used to detect cholera toxin in a flowing solution.  They measured the read-outs using electrochemical impedance spectroscopy (EIS), which monitors an increase in the electrodes’ resistance to alternating current when the cholera toxin binds to the antibodies. This allows a detection limit of 1 ng mL-1, over a thousand times smaller than the lethal dose to be detected.

’It’s an electrical read-out that can be miniaturised further,’ says Maruccio. ’We are heading in the direction of being able to connect the chips directly to a laptop so the data can be analysed directly.’

Tanner Nevill, an expert in biosensors at Fluxion Biosciences in San Francisco, US, states that although the concept of a portable EIS detector for diagnostics is not novel, no one has successfully commercialised it. ’If the authors are able to take this to the next level, then that would be a significant accomplishment,’ he says. ’A big challenge will be transitioning from spiked samples in the laboratory to real world samples and settings,’ he adds.

Maruccio and the team are now looking to optimise the device for various applications, particularly as it can detect other diseases and analytes, with a view to commercialisation.