Microneedles may mean an end to painful injections

Microneedles that could deliver drugs painlessly can be made more quickly and cheaply thanks to a laser polymerisation technique developed by US scientists. The researchers say applications such as an all-in-one glucose sensor and an insulin delivery system could be less than 10 years away.

Patches coated with microneedles could allow controlled and painless drug delivery. But the needles that have been developed to date have not made it into hospitals because they break too easily.

Now a team from the Georgia Institute of Technology have used a clever combination of initiator molecules, monomers and ultrafast lasers to craft tiny needles which they say are strong and safe enough to be used on patients. 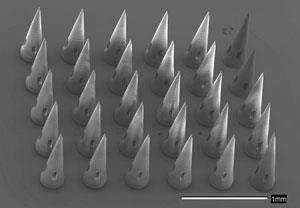 The technique, called two-photon polymerisation (2PP), builds the microneedles from a mixture of an organic-ceramic monomer and an initiator molecule. When a photon from each of two lasers hits an initiator at exactly the same time it forms a radical, starting a localised polymerisation. By moving the laser beams and controlling the time difference between the photon pulses, the team can create any shape they choose with pin-point accuracy, after which they simply wash away the unreacted monomer to leave the polymer structure behind.

The 2PP technique has many advantages over other methods of making microneedles, says Roger Narayan, associate professor at the University of North Carolina and lead author of the paper. ’The materials used in 2PP are currently available in the clinical setting and have gained widespread acceptance both in the United States and Europe,’ he told Chemistry World. ’In addition, 2PP can be set up in a conventional ’dirty’ environment that does not contain cleanroom facilities.’

Narayan says that ’the technology is financially viable and could be put into use immediately’. But he added that more work to improve the mechanical properties of the needles is needed and ’commercialisation and adoption of this process may take five to ten years’.

Mark Prausnitz, a professor at the Georgia Institute of Technology, US, works on the use of microneedles, ultrasound and other approaches to deliver drugs.

’This work by Narayan and colleagues represents a novel advance in the field of microneedle fabrication,’ he told Chemistry World. ’The use of two-photon fabrication permits precise control over microneedle geometry, and the combination of ceramic and polymer materials provides mechanical strength, processability and functionality to customise microneedle designs.’