Researchers in South Korea and India have made microfluidic reactors that safely harness the synthetically powerful but noxious catalyst osmium tetroxide.

Dong-Pyo Kim at POSTECH in Pohang, South Korea, and colleagues trapped OsO4 in poly(4-vinylpyridine) (P4VP) ‘nanobrushes’ on the inner walls of silicone microreactors. Their reactors catalysed dihydroxylation and oxidative cleavage – steps important in natural product, pharmaceutical and fine chemical synthesis – of 10mmol of various olefins with yields of more than 90%. Only 50µg of OsO4 was needed, making the microreactor catalyst 50 times more efficient than bulk supported systems.

OsO4 powers reactions like the chemistry Nobel prize winning Sharpless asymmetric dihydroxylation, but is toxic and unusually volatile, and therefore produces deadly fumes. ‘Many researchers have tried to stabilise or immobilise it on a polymer or inorganic substrate,’ Kim tells Chemistry World. ‘But leaching and exposure to the environment is inevitable in a bulk reaction system.’

So Kim’s team sought to trap OsO4 in microreactors by moulding two pieces of silicone holding mirror image nano-sized channels using soft lithography. As silicone normally swells in organic solvents they spin-coated the channels with protective polyvinylsilazane (PVSZ) layers, which they then bonded PV4P nanobrushes to. After putting the two halves of silicone together, the researchers infused the microreactor with aqueous OsO4. 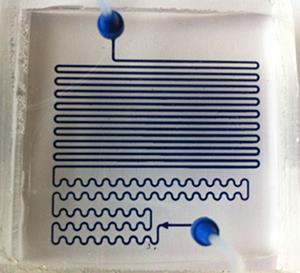 Initially, catalytic activity disappeared after just a day. To boost the reactor’s stability, the team reduced OsO4 to a dark blue oxoosmium(VI) complex by feeding tetrahydrofuran through it after catalyst loading. In testing on biomass-based olefins, dihydroxylation reactions exceeded 98% conversion in 10 minutes, and oxidative cleavage reached similar levels in seven minutes. But the reactor’s volume limits it to around 1mmol of product per hour.

Reactor performance did not change significantly after 10 hours’ continuous use, or three months’ storage. Reaction mixtures contained just 30–50ppb osmium, around 100 times lower than other reported systems, Kim says. ‘We are now working on scale-up of our reactor system for possible industrial application and further developing microchemical systems for hazardous heterogeneous catalysts,’ he adds.

Paul Watts, who researches microfluidic continuous flow chemistry at Nelson Mandela Metropolitan University in Port Elizabeth, South Africa, notes the increasing interest in such reactors’ safety potential. He says Kim’s team’s reactor ‘provides a very elegant way to use OsO4 within research’. ‘I envisage the methodology being of significant use to other organic chemists,’ he adds.