US scientists are pursuing a new avenue of research on cocaine addiction based on short pieces of RNA that can regulate the expression of whole swathes of genes. One of these microRNAs has been identified as a potential target for anti-addiction therapeutics.

Because complex psychiatric disorders like addiction and schizophrenia are controlled by many different genes, the molecular mechanisms behind them are difficult to pick apart. But Paul Kenny at the Scripps Research Institute in Florida thought microRNAs, which are known to influence the activity of genes in multiple circuits in the brain, might play a regulatory role. 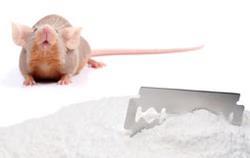 Kenny and his team now show that a particular microRNA called miR-212 is upregulated in a rat model mimicking cocaine addiction - one in which rats are given extended daily access to the drug - compared to rats with restricted access to cocaine. Interestingly, when the researchers injected the rats with a virus specifically designed to boost miR-212 expression, the animals that had been ’addicted’ gradually took less cocaine, suggesting that the microRNA protects against addictive behaviour.

The team went on to trace the interactions of miR-212 with various genes and pathways, including one known as Raf. ’We know that Raf is important - Raf kinase and a lot of other steps along the molecular cascade through which the microRNA works,’ says Kenny. ’And there are actually a lot of points in that cascade that seem to be druggable.’ He adds that some of the targets identified are already targets for other conditions, such as cancer, so there could be opportunities to tap into existing therapeutics to develop drugs for addiction.

’I think microRNAs are a good way of explaining the changes you see in the brain with drugs,’ says Gerome Breen, who studies the genetics of addiction at King’s College London, UK. He thinks the mechanism Kenny’s team has put forward for miR-212 is convincing. But, he notes, it remains to seen whether the mechanism is the same in humans.

Kenny is planning follow up work in other drugs and addictive behaviours, but he suspects miR-212 may act specifically on cocaine addiction. ’One theme that we’ve found is that there are important differences in the underlying molecular mechanisms through which different drugs act and that’s why the addictions appear to be slightly different,’ he says.