A way to label molecules with colourful barcodes has been developed by chemists in South Korea. The barcode particles, which resemble microscopic dice, have a pattern of coloured spots that gives them a unique spectral fingerprint. In addition, they can spin around and function as miniaturised stirrer bars to speed up reactions.

Labelling compounds is particularly helpful in drug discovery, where the best way to find active molecules is with high-throughput screening. This method tests millions of compounds for reactivity with a biological target, and a common technique is mixing thousands of candidates together in a biological assay. By labelling the molecules with fluorescent tags, any compounds that are ’hits’ can be easily identified.

The secret to making the new particles, says Sunghoon Kwon, who led the research at Seoul National University, is ’magnetic ink’ developed by his team last year. This is made from a mixture of UV-sensitive polymer and magnetic nanocrystal clusters that reflect specific wavelengths of light depending on an applied magnetic field.

As the magnetic field varies, the ink changes colour - and in combination with optical lithography, UV light can be used to ’freeze’ the colour in small areas on the particles. This process can generate spots as small as 5um on a 200um tile, and takes less than a second. 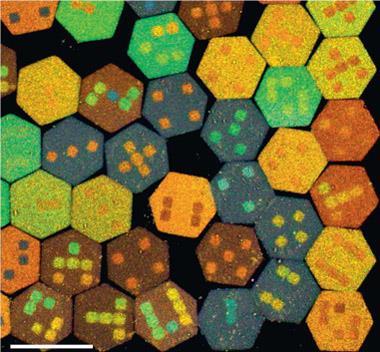 The microparticles can be made in a range of shapes with multi-coloured spots, giving each a different spectral fingerprint

The new labels greatly increase the number of unique identifying tags that could be used at once, from around a thousand combinations up to well over a billion. But this is not the only advantage, Kwon says. ’Our geometric coding capacity dwarfs any previously developed encoding techniques - but the immediate advantage to biologists is the faster reaction time.’

Since the labels contain magnetic nanoparticles, a rotational magnetic field can be applied to spin them around, Kwon explains. ’We found that this process can reduce reaction times by a factor of ten,’ he told Chemistry World.

The process may also be useful in sequencing DNA - where many different labels are required to tag and track samples. Another possibility is to develop new anti-counterfeiting techniques, as the unique spectral fingerprints generated would be impossible to replicate.

Robert Wilson, an expert on nanoparticle labelling at the University of Liverpool, UK, is interested by the research, but indicates that some improvements will be needed before the process is practical. ’Currently, the particles are too large for use in bioassays - most commercially used particles have diameters of about 10um rather than 200um,’ he says. ’In addition, although making each particle in less than a second sounds fast - when you need to make thousands for each individual assay, it is very slow indeed.’