Microscopic springs made from nanotube composite

Researchers in Canada have developed a way to rapidly make tiny 3D objects out of a carbon nanotube-enriched polymer, using UV light to quickly set the structure in place. As a demonstration, the team made coiled springs half a millimetre in size, and hope to build other components such as gears, which may help build useful microscopic mechanisms in the future. 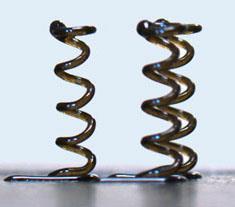 ’There aren’t many ways to build complex 3D structures on a very small scale,’ says Daniel Therriault, who led the research team at the ?cole Polytechnique de Montr?al, Canada. ’Here, we have developed a micro-fabrication method using ’direct-write assembly’ - in which a robot dispenses a liquid polymer that hardens as soon as it leaves the nozzle.’

Therriault’s material of choice is a polymer nanocomposite that is reinforced with carbon nanotubes. This makes the material strong enough to support its own weight and also makes it electrically conductive.

’We make the material by dispersing nanotubes in a liquid thermosetting polymer - and then two UV lamps pointed at the nozzle cause it to solidify very rapidly as it is dispensed,’ Therriault says. 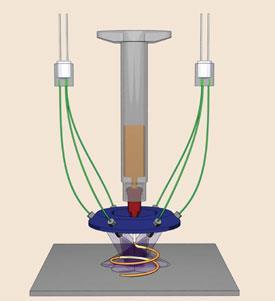 The nanocomposite material is extruded through a micronozzle, and then exposed to UV radiation to quickly set the spring in place

The robotic dispenser releases material at a speed of around a millimetre every three seconds - so it takes less than a minute to make most shapes. Since the system can be programmed to build specific shapes, it can also reliably make the same shapes every time.

So far, the team has only made springs and freestanding 3D-lattice scaffolds, but they envisage many potential applications in future. The next step, Therriault says, is to experiment with the polymer material, then start building functional microscopic mechanisms. Possible applications could include microchip shock absorbers, flexible electrical connections,  meshes to act as electromagnetic shields, or even scaffolds for tissue engineering.

’I am very excited about this work,’ says Jennifer Lewis at the University of Illinois at Urbana-Champaign, US, whose team were the first to show the potential of this direct-write process.  ’I think a significant advance has been made in that shapes of this complexity have not previously been produced by any direct-writing approach.  They would certainly not be possible by inkjet printing, and I foresee many potential applications for this on the horizon.’